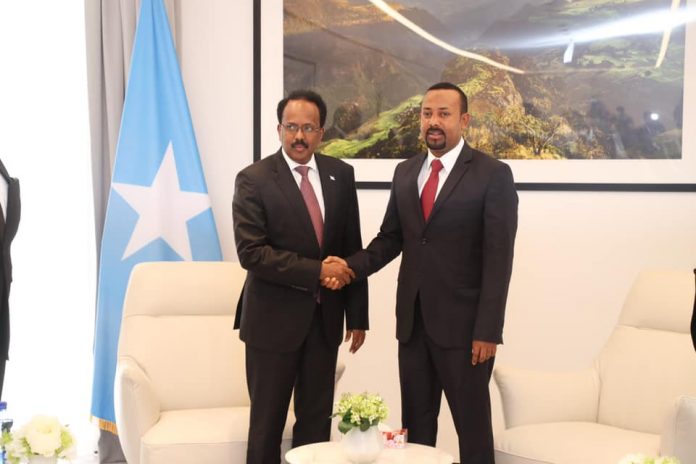 For the last two-years, there was conspicuous diplomatic relationship between the two-states. When Abiy Ahmed takes the leadership in April, 2018, he expedited enriching the diplomatic ties among the horn of Africa countries.

In June, 2018 PM Abiy spent one-day visit to Somalia after two-months of his premiership where he met with Somalia’s incumbent president his Excellency Mohamed Abdullahi, aka Farmajo. The two leaders agreed upon to resurrect and enrich the diplomatic relationship of the two-nations, and to get rid of the economic barriers.

In this regard, plenty of the political commentators opined that, the two-states’ relationship is booming and blooming, while some others evoked that, the integration is just ceremonial and nothing tangible has been achieved so far.

Somalia and Ethiopia used to consider each other as an arch-enemy since long-time. In 1964, the two-states had a war. Again, in 1977, the two-countries had a bitter war which each side lost lives and limb.

The Ogaden war in 1977 between Somalia and Ethiopia came when Somalia’s troops tried to emancipate the Ogaden region which currently known as Somali region in Ethiopia. At the beginning, Somalia’s troops captured majority of the Somali region, but when the Russian ambassador in Somalia was expelled from Somalia surprisingly which was political suicide committed by the central government of Somalia under president Siadbarre, the Ethiopian troops got a military support from Russia, Yemen, and Cuba which paved the way the ultimate victory of Ethiopia over Somalia. The notion of the annexation of the Somali region to Somalia reinvigorated when president Siadbarre took the leadership of Somalia via coup in 1969. Moreover, when Emperor Haile Selassie, who was long-standing western ally was ousted by Mengistu Haile Mariam, Ethiopia undertook a period of instability which gave an opportunity Somalia to support the separatist movement of Western Somali Liberation Front (WSLF).

Since then, the two-countries were at loggerheads, and their relations remained stormy. In 1988, the two-states have settled their border dispute into a modus vivendi of sorts.

In 1991, the central government of Somalia was ousted by plenty of armed to the teeth, and the country undertook civil war. Since then, Ethiopia embarked to spread its leverage in Somalia by supporting the warlords who used to control majority of Somalia, especially the South-Central regions. Since then, Somalis considered Ethiopia as notorious state. And every Somali politician who wants to win an election, he/she peddles Anti-Ethiopianism rhetoric in order mesmerize the gullible community.

In 2006, Ethiopian troops intruded Somalia after they receive a request from the former Transitional Federal Government (TFG) which was elected in 2004 in Embagathi-Kenya, and led by his Excellency president Abdullahi Yusuf Ahmed. The TFG couldn’t come in Mogadishu because of the warlords who were dominating majority of the country, instead the government settled temporarily the city of Jowhar, and later relocated to the city of Baidoa. In 2006, the Islamic Court of Union (ICU) erupted in Mogadishu, and started fighting against the coalition of warlords under the mantra of (Coalition for Anti-Extremist). The ICU within months vanquished the coalition, and took over the control of Mogadishu, and South-Central regions of the country.

The TFG government instantly embarked a talk with the ICU top officials in order to hammer out. Unfortunately, all the embryonic talks ended-up futile which led finally a military confrontation between the ICU, and the TFG which was getting a military support from Ethiopian troops. Enormous people have been killed, tremendous others were wounded, and colossal of people have been displaced during the bloody war between the TFG backing with the Ethiopian troops, and the ICU.

During the battle, the Ethiopian troops bombed Mogadishu, and Baledogle Airports, and captured the cities Beletweyne, Bandiradley, Adado, and Galinsor. Finally, on December, 29, 2006, the TFG with the Ethiopian troops forcefully entered the capital city of Mogadishu, and the ICU retreated, and started a guerilla war. Approximately, 1,000 have been died, and 3,000 have been injured.

Some of the security experts, and former security officers opined that, the reason which increased the causalities was, the ICU recruited randomly and roughly Non-trained young people, but who had an extreme enthusiastic of defending their territory from the aggression. The ICU para-military troops continued until the beginning of January, 2007 their ambushes, improvised explosive devices (IEDs), and guerilla war against the TFG government which was supporting by the Ethiopian troops.

Though, there is no exact number of the fatalities during the Ethiopian invasion in Somalia (2007-2009), but several institutions indicated different numbers. As the Somalia’s Elman Human Rights group released, nearly 6,000 civilian fatalities occurred in the capital of Mogadishu, closely 8,000 civilians were injured, and more than 700,000 displaced from their homes due to the continuing war between the Somali government and the ICU in 2007. More importantly that, USA’s navy was siding the TFG, and the Ethiopian troops in order to isolate the Islamic fighters to escape via Somalia’s coastline. Because, USA was searching the international Islamic fighters who infiltrated in Somalia, especially the three members who were accused that, they were responsible the bombings of the American embassies in Kenya, and Tanzania in 1998.

The Somali region, as scrubland, the second largest region, and the third most populous region in Ethiopia. Ethnic Somalis in the region share common ancestor, religion, history, language and familial ties with Somalis living in Somalia proper. Since Somalia gained independence in 1960, it has made repeated claims towards the annexation of the Somali region to Somalia. The long-standing dispute over Somali region is not embryonic.

The two countries fought in the vicious Ogaden War over the Somali region in 1977. The notion that, Somali region belongs to Somalia persists. Ogaden National Liberation Front (ONLF) is the second-oldest opposition in Ethiopia, and was fighting against Ethiopia for self-determination since their birth in 1984. ONLF superseded former Western Somali Liberation Front (WSLF) which lost its existence after the Ogaden war. Though, ONLF has signed an agreement with Ethiopia, but that doesn’t mean that, ONLF surrendered its goal towards the self-determination and secession to the Somali region.

Somalia- Ethiopia diplomatic relationship remains skeptical and surreptitious as long as Somalia’s foreign policy is volatile, and each incumbent government leads the country into their favorite ally. The incumbent government under the leadership of president Farmajo has a close tie with the incumbent prime minister of Ethiopia, Ato Abiy Ahmed. Plenty of political pundits expressed that, Farmajo and Abiy are good friends as they are product of USA, and they imitate and mimic the outgoing USA’s president Trump.

Additionally, Abiy’s aim is to dominate the Horn of Africa’s politics, as he did further concessions to Eritrea where he surrendered the disputed areas between Ethiopia and Eritrea in order to discourage Tigrayans who were the most powerful ethnic in EPRDF coalition party which was ruling Ethiopia for the last three-decades.

Equally, Abiy ostracized Djibouti by disallowing to engage the Horn of Africa transformation which Ethiopia, Somalia, and Eritrea engaged. Also, Abiy is creating a political hostility among Kenya, and Somalia’s incumbent government, while he is strengthening Ethiopia’s tie with Kenya. Adding all the sums, Ethiopia-Somalia relationship remains unpredictable; ambivalent; bleak, and amorphous!