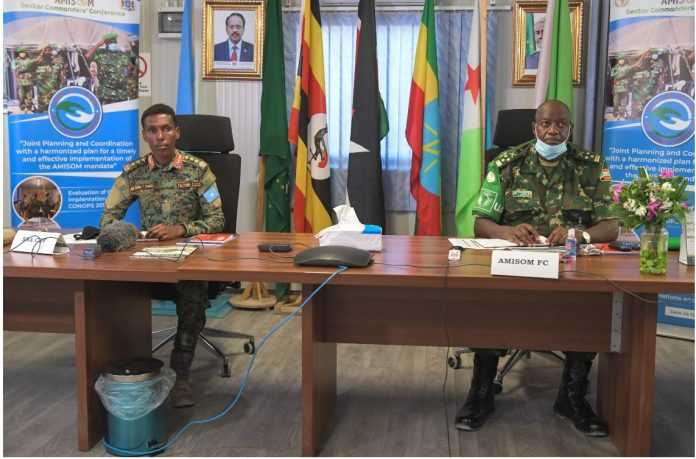 MOGADISHU, April 16 (Jowhar.com) — Senior leaders of the African Union Mission in Somalia (AMISOM) and the Somali National Army (SNA) have agreed on strategies for Somali security forces to take a lead role in future security operations, the AMISOM said Friday.

The months ahead will be crucial in the implementation of the decisions reached at a two-day meeting that ended Thursday evening, said Francisco Madeira, special representative of the chairperson of the African Union Commission and head of AMISOM.

The meeting, which evaluated security gains in Somalia, urged Somali military commanders to continue to flush out al-Shabab and other armed opposition groups in the country.

“As the mission gets into the next phase, where AMISOM is expected to gradually transfer security responsibility to the Somali security forces, joint planning and coordination, as well as harmonized force reconfiguration will enable the mission to maintain operational effectiveness, thus, we can timely and effectively respond to threats within our area of responsibility,” Madeira said in a statement issued on Friday.

He said the conference marked an important milestone in the roadmap toward peace and stability in Somalia, where Somali security forces are to assume a lead role in their own security operations, as laid out in the Somali Transition Plan (STP).

The meeting brought together representatives from the Somali government, the SNA military and AMISOM, as well as international partners.

According to the AU mission, the Somali Transition Plan is a key deliverable in the AMISOM mandate agreed upon in December 2017, when the government and the international community agreed on a conditions-based transition plan to enable Somalia to assume full responsibility for its security.

SNA Chief of Defense Forces Odowa Yusuf Rage reiterated that his forces, with support from AMISOM and other partners, have been building capacity for the eventual takeover of security responsibilities from AMISOM.

“I want to express my commitment to all the plans we have agreed upon and make it clear that SNA is committed to implementing its part as agreed. I call upon the sectors to take seriously the reconfiguration synchronization matrix and put in action all its recommendations so that we can achieve our harmonized plans,” Rage said.

AMISOM force commander Diomede Ndegeya urged all the sectors to embark on its implementation along with the AMISOM mandate.

Ndegeya called on SNA commanders to establish as soon as possible the AMISOM-SNA joint planning and coordination cells within their sectors, and ensure that they are fully operational.

“I call upon sector commanders to continue to degrade al-Shabab and other armed opposition groups, and secure the main supply routes and key population centers by conducting joint operations with Somali security forces,” he added. Enditem