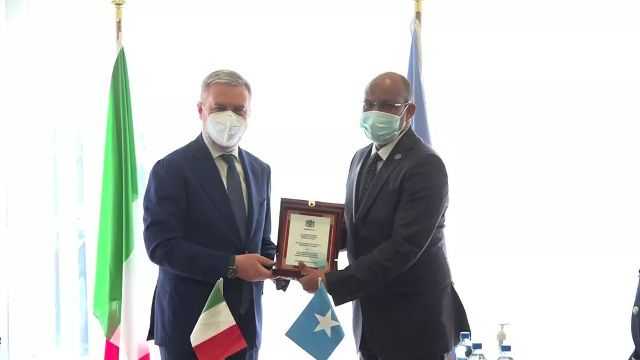 State Minister in the Ministry of Defense of the Federal Government of Somalia Mohamed Hagaa, accompanied by the Commander of the Somali National Army General Odowa Yusuf Rage and the Director General of the FGS Ministry of Defense Ahmed Abdi Koshin, welcomed Italian Minister of Defense Guerrini Lorenzo in Mogadishu today.

After that, officials from the Ministry of Defense and the Armed Forces Command met with the delegation led by the Italian Minister of Defense, and discussed bilateral relations and it is noteworthy that during the meeting the Minister attended by telephone. Somali Defense Minister Hassan Hussein Haji, on a mission abroad.

At the end of the meeting, the Minister of State for Defense of the Federal Government of Somalia addressed the media. Mohamed Hagaa pointed out that the Italian government is one of the countries that took part in the reconstruction of the country, noting that Somalia has made progress in many areas.

Meanwhile, Italian Defense Minister Guerrini Lorenzo said there was great hope for Somalia’s recovery, adding that he had come to Somalia to strengthen the long-standing ties between the two countries.

Finally, the Minister of State for Defense of Somalia presented an Certificate of Merit and Medal to the Italian Minister of Defense, highlighting the long-standing relationship and cooperation between the two governments.