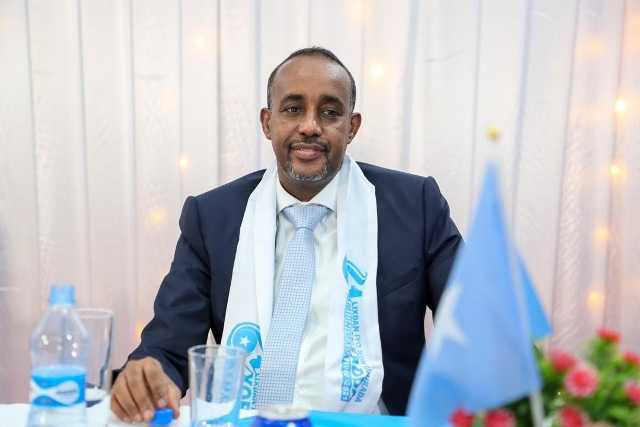 Press Statement by the Prime Minister of the Federal Government of Somalia H.E. Mohamed Hussein Roble responding to the unconstitutional statements issued by the Office of the President-

After seeing the unconstitutional letter issued by the Office of the President and circulated in the media, The Prime Minister of the Federal Government of Somalia (FGS), H.E. Mohamed Hussein Roble has issued the following:

A- Violation of the Law

2- Similarly, the President has deliberately violated article 99 of the Constitution specifically sub-articles {A} {B} {C} {D} {E} {F} {G} and {H}. All these state that the Government has full authority formulating general policies and execution, the approval and enforcement of administrative laws, preparation of annual budgets and accounting, ensuring security of the country, protecting interest of the state, and appointment and dismissal of senior government officers. The president also violated article 100 which mandates Prime Minister to appoint and dismiss cabinet ministers.

3- In addition, the President violated article 103 of the Provisional Constitution which gives the incumbent Prime Minister and his cabinet the executive power to continue and carry out routine duties until new Prime Minister is sworn in to office.

4- The president is intentionally denying article 91 of the Constitution which clearly limits the president’s official term to 4 years beginning from the day he is sworn to office, that ended 8th April of this year, while he is trying to blatantly interfere the Constitutional Powers of the Government with the aim of causing vacuum and instability.

5- Therefore, based on the Supremacy of the Constitution, the Prime Minister, referring to article 4 paragraph 1 of the Provisional Constitution that dictates the Government to accept only decisions in accordance to the Constitution, hereby declares that the unconstitutional letter issued by the President is null and void, and will not be complied with.

1- The President who had the responsibility to lead the country to transparent democratic elections has failed to fulfill that constitutional mandate and that has led to 17th September 2020 Agreement which the Prime Minister was entrusted to in order to hold the agreed election.

2- Unfortunately, the President, using his office and some security agencies has engaged in actions jeopardizing the election process, bridging the agreement and undermining the Prime Minister’s mandate within few days from the agreement. He created conflicts that eventually led to the bloody term extension attempt which he has not yet given up.

3- During the last months, the President has been taking actions aimed at undermining the Prime Minister’s Constitutional Powers which he returned to the Prime Minister in front of the Parliament – the election and security leadership. He also attempted to bridge the 27th May 2021 Agreement that concluded the violent conflict caused by the attempted term extension of the President of back 12th April 2021.

4- Similar to the violent clashes which the president instigated on April 25th that led to the disintegration of the security forces and displacement of Mogadishu population, this unconstitutional letter issued by the president reveals that he has not yet abandoned from his desire to take this country back to civil war, and his wish to illegally continue occupying the highest office of the country.

International Court of Justice (ICJ) has ruled in favor of…

1- The Prime Minister, referring to articles 99, 100 and 103 of the constitution, instructs all government agencies to continue fulfilling their responsibilities in serving their people and protecting national interest.

2- Based on 17th September 2020, 27th May 2021 and 22nd August 2021 agreements reached by the National Consultative Council, the Prime Minister instructs all federal and FMS level election bodies to speed up implementation of the election of both houses in accordance with the election timeline.

3- The Prime Minister urges all presidents of Federal Member States to facilitate election committees to carry out their duties to complete the country’s elections.

4- In pursuant to paragraphs {B} {C} and {E} of article 127 of the Provisional Constitution, the Prime Minister directs heads of armed security forces not to meddle in political affairs, protect the adherence to the laws of the democratic institutions and uphold the constitution, while continuing their duties towards protection of citizen safety and general stability of the nation.

5- The Prime Minister commends national army for the bravery and sacrifice that they are making for their country and ensures that the Government is committed to the continuation of their rights. The Government is also committed to take all necessary actions that encourage the heroes who are ready to defend their people and country.

6- The Prime Minister underlines that it is unacceptable to use some of government agencies’ budget for any purpose that is outside the country’s financial transparency system. Financial institutions must adhere to the compliance of the Prime Minister’s decree issued on 9th September of this month that was based on accountability and transparency principles.

1- In accordance to article 3 of the Provisional Constitution, the Prime Minister reminds the President to uphold the fundamental principles of separation of powers of the state institutions and to stop interfering in the affairs of the Government and Judiciary, and clear example is how he is trying to obstruct Ikraan Tahliil Farah’s access to justice.

2- The Prime Minister, in protection of national interest and governance system, advises the President to stop constitution violation, bridging election agreements, undermining government functioning, instigating instability and attempting to have an advantage of the election while equality between all candidates running for the presidency must be ensured.

3- The Prime Minister appeals the Somali people to remain calm, maintain security and support the Government in completing the national election which is the only path to avoid chaos.

1- The Federal Government of Somalia reaffirms to the Somali people and international community that it is focusing on completing the elections, maintaining security and safeguarding the governance system so that the country’s leadership is peaceful transferred.