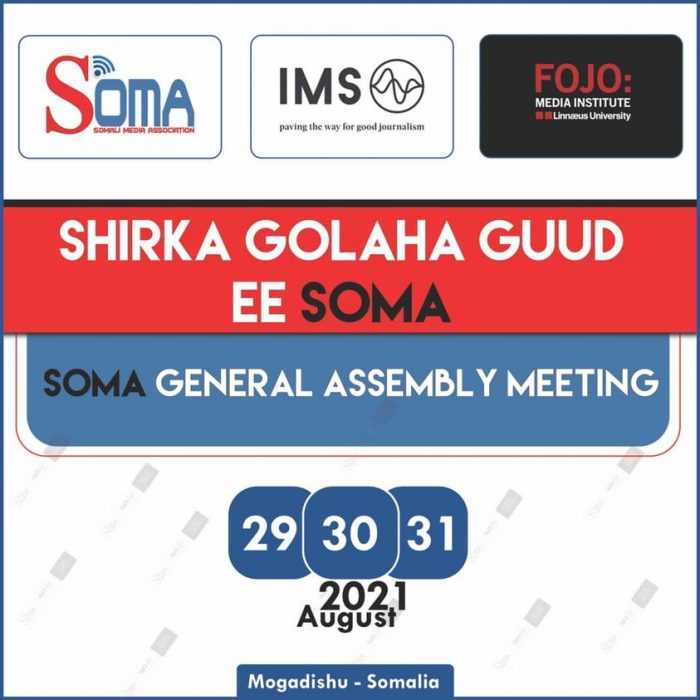 Mogadishu, Sunday 29 August 2021: The Somali Media Association (SOMA) has started the first day of its three-day General Assembly Meeting that has been opened at Sahafi Hotel in Mogadishu, Somalia.

The SOMA General Assembly Meeting ,which is held once in every three years is aimed to focus on the key topics that is included review of the past achievements of the association and the way forward, discussion of the safety protocol for protecting the media and the journalists, the advocacy strategy and election of new governing team for the association.

In his opening remarks, Mohamed Osman Makaran, the Chairman of SOMA has welcomed the members from the thirty –two SOMA Media houses operational in Mogadishu and in all the five regional states of Somalia and the invited guests.

He appreciated IMS/FOJO for supporting implementation of the GA meeting, which is platform to exchange of information related with the program activities for developing the media and the journalists and electing new management team.

On his part, Mohamed Abdiwahab, SOMA Secretary General has pointed out SOMA has taken major role in community awareness raising on Covid-19 by transmitting awareness raising messages throughout its member media houses operational in all the regions of Somalia.

“For the past three years, SOMA has interlinked between the communities in the various regions through the Content Sharing program. The Content Sharing Program has been produced and broadcasted throughout SOMA member media stations across Somalia, which as result paved the way for all the communities are informed of their livelihood situations.” Mohamed Abduwahab, SOMA Secretary General stated.

“The SOMA GA will discuss the destiny of the SOMA associations, and elect new leaders. This is a sign that media association is democratically electing its managers, despite the fact the politicians and government whose term has expired have not yet fully held the expected general elections.” Abdalle Mumin, Chairperson of the Somali Journalists Syndicate (SJS) said speaking at the opening event.

Thereafter, Abadir Abdulkadir Elmi, Chairman of the Federation of Somali Journalists (FESOJ) expressed good wishes for SOMA for convening its General Assembly meeting and expected the association will elect effective managers. He said FESOJ and SOMA has cooperated in the advocacy efforts to promote the professional skills of the media staff and protection of the media and journalists.

Furthermore, Nafisa Hirsi from the Media Women Network (MWN) has suggested the incoming new managers of SOMA should focus on making change in the situation of female journalists’ status in the aspect of leadership role.

‘We hope the SOMA GA meeting to achieve substantial results and good leadership to be elected. We are also looking forward the new team to continue cooperation between SOMA and SWJ as both associations are member of SMSJ.” Farhiya Mohamed Khayre , Chairwoman of the Somali Women Journalists (SWJ) said.

Abdulkadir Mohamed , Director of Media Relations of the Ministry of Information expected success for the SOMA GA meeting and pointed out to be working with the new management of the association.

The SOMA General Assembly Meeting is expected to continue for the next two days and will be focusing on important issues including the content sharing program, the advocacy strategy and electing new management team for the association in the next three years.

Presently more than 30 operational media outlets consisting of radio and TV stations based in Puntland, Galmudug , Hirshabelle, Banadir, Jubaland and South West of Somalia are united under the SOMA association.

The Taliban agree to allow foreign nationals and Afghans with travel authorization to leave Afghanistan.