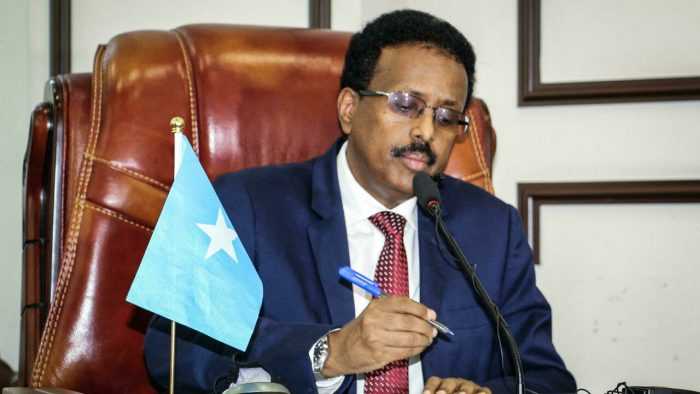 Somalia’s president said Thursday that he had withdrawn the prime minister’s executive powers, the latest twist in a dispute that has plunged the country into a deep political crisis.

“The prime minister has violated the transitional constitution so his executive powers are withdrawn … especially his powers to remove and appoint officials, until the elections are completed,” the president’s office said in a statement.

The dispute between Somalia’s president and prime minister, nominally over a murder investigation, marks a months-long escalation of tension between them in the Horn of Africa nation riven by militant attacks and clan rivalries.

The two men have faced hiring and firing at Somalia’s security agencies in a dispute that has raised fears for the country’s stability as it struggles to hold long-delayed elections and keep the Islamist insurgency at bay.

The power struggle became public last week when Roble fired Somalia’s intelligence chief for his handling of a high-profile investigation into the disappearance of a young agent.

Farmajo overruled the prime minister and appointed the abandoned intelligence official as his national security adviser.

The dispute has threatened to put an already fragile electoral process in deeper danger.

Farmajo’s four-year term expired in February, but parliament extended it in April, sparking deadly shootings in Mogadishu, seen by some rivals as a blatant takeover.

Roble improvised a new voting schedule, but the process has been delayed and last week he accused Farmajo of trying to claim “electoral and security responsibilities.”

The UN Assistance Mission in Somalia has urged both leaders to stop arguing and focus on the elections.

Analysts say the deadlock in the elections has distracted from Somalia’s biggest problems, especially the violent Al Shabaab insurgency.

Analysts say the stalemate in the elections has distracted from Somalia’s biggest problems, especially the violent Al Shabaab insurgency. Al Qaeda allies were driven out of Mogadishu a decade ago, but they maintain control of rural areas and continue to carry out deadly attacks.