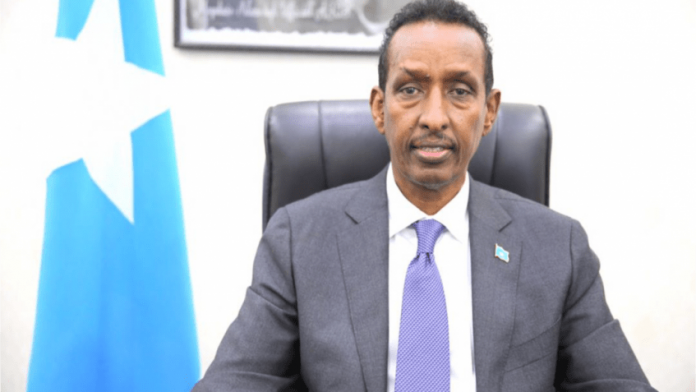 Rapid spread of the office’s looga the Foreign Minister of the Federal Government of Somalia Ahmed Awad Ise and held the position for nearly three years has prompted a number of questions, which all show the chaos of Somalia’s crisis in the country within aloosan.

The statement from the Ministry of Foreign Affairs stated that it was not the government’s official decision.

“I hereby declare that there is no official statement from the Ministry of Foreign Affairs on the situation in Ethiopia. The circulating press release does not represent the views of the Federal Government of Somalia, so it does not exist,” he wrote on Twitter. Ahmed Issa Awad

Reliable sources close to the Ministry of Foreign Affairs has confirmed to us that the Prime Minister’s Office Ra’siiul Abiy through the flare Foreign Minister Mohamed Osman requested action minister Awad, so tonight looga took office.

Officials in the prime minister’s office, meanwhile, confirmed to us that Prime Minister Roble had asked not to rush the matter but had been pressured to issue a letter, which could cast doubt on Roble’s independence in his government’s decisions.

Awad, who was appointed as an unnamed ambassador to the country but appeared to be persuaded, was quick to respond, thanking the President and the Somali community.

Relations between Somalia and Ethiopia have reached an all-time high since President Farmajo took office in February 2017, opening a new chapter in relations between the two countries but not yet accepted by the Somali people. distance between Kenya and Djibouti, with which Somalia has a long history of good relations.