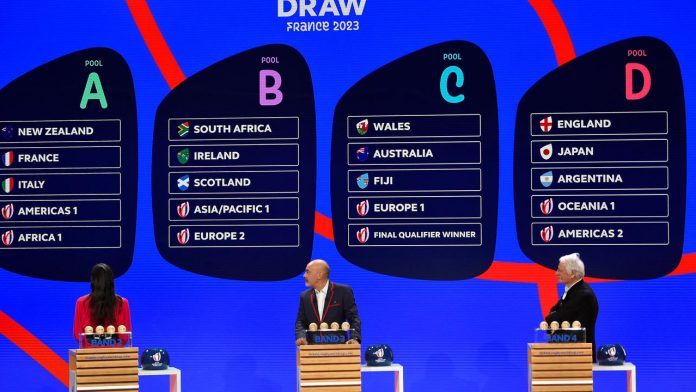 Three-time winners and perennial favorites New Zealand will face hosts France in the pool phase of the 2023 Rugby World Cup (RWC), but both teams will be sure to move on after landing Italy as the third place in the group when the draw was made on Monday.

Holders of South Africa were drawn against Ireland and Scotland while second-placed England face the potentially tricky double challenge in Argentina and Japan. Wales will play Australia for the fourth time in five tournaments, with the ever-dangerous Fiji also in that pool.

Should the groups go about to form France would face a tough quarter-final against Springboks while England face Australia or Wales. Ireland, who have never gone further than the quarter-finals, would look hard to break that streak when they face New Zealand.

The form course can then produce a repeat of the semi-final 2019 when England beat New Zealand and South Africa defeated Wales.

Scotland and Argentina would have been in the second seed level on the current ranking but since the seed was based on positions at the end of last year due to the COVID-ravaged calendar, they were placed on the third level and face a tough challenge to make progress.

The world champions South Africa entered the draw after playing a single match since the final in 2019. Their victory in Japan marked the first time a team won the competition after losing a pool match.

“Even though it is still almost three years away, it is good to have an end goal to work towards,” said South Africa’s coach Jacques Nienaber.

“Being in the same pool as Ireland and Scotland will be a huge challenge, but to win the tournament you have to be able to beat all the teams and we will be thoroughly tested in the pool phases.”

New Zealand is the only team that has never lost a pool game. In 2011, they beat France at that stage, then again in the final. They have been paired with Italy for a remarkable seventh time in ten tournaments – a contributing factor in Italy’s brand as the only team to have played in each World Cup but never reached the knockout stages.

The tournament will take place in nine cities from September 8 to October 21 with the final in Paris. The remaining eight qualifiers have not yet been determined and will not be completed until November 2022.

French President Emmanuel Macron was present at the draw.

“The Covid-19 crisis is terrible. In 2023, we want to offer what France has to offer: the French way of life – friendliness, gastronomy, parties and culture,” Macron added.