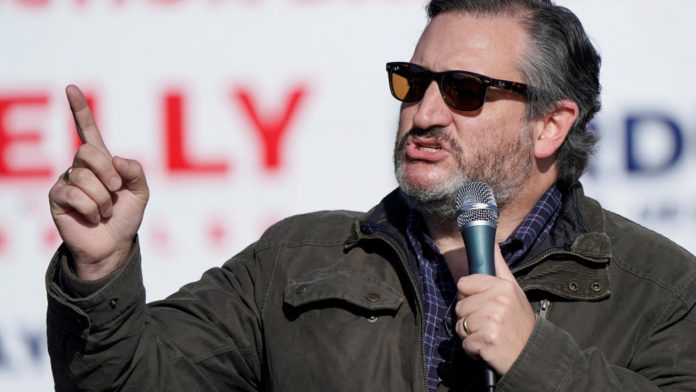 A group of Republican senators led by veteran lawmaker Ted Cruz said Saturday they would not vote next week to certify Joe Biden’s election victory – the latest step in supporting Donald Trump’s efforts to undermine the vote.

The initiative, which seems likely to fail, flies before judgments in dozens of courts, and the conclusions of officials in several key states, that there were no major voting problems.

The Republican statement, signed by Cruz and six other current senators along with four elected senators, claims that “accusations of fraud and irregularities in the 2020 election exceed all our lives.”

The group said that when Congress convenes in a joint session on Wednesday – for what would normally be a pro forma certification of Biden’s victory – they will demand the establishment of a special commission to conduct a “10-day emergency review” of election results.

The statement says that individual states can then convene special legislative meetings and possibly review their voting sums.

The 11 participants join Senator Josh Hawley of Missouri, who previously said he planned to object on Wednesday.

A Republican member of the House of Representatives, Louie Gohmert, has also announced his plan to oppose certification, and more than 100 House Republicans will reportedly support his challenge.

Gohmert sought to further step up efforts with a trial that would have given Vice President Mike Pence – traditionally in a ceremonial role in Wednesday’s session – the power to reverse the election result.

Pence opposed that effort, and a federal judge in Texas on Friday rejected the suit.

Hawley and Gohmert’s challenges will ensure that Congress must meet to hear the complaints.

Cruz is trying to undermine a fairly decided choice (which DHS called the “safest in American history”), deliberately cynically saying that even if the current attempt will fail, it is now much more likely that a future one will succeed. This is rebellion.

The congressional meetings will certainly be controversial and will play out against the backdrop of pro-Trump rallies in Washington next week encouraged by the president himself.

As with Trump’s second attempt to reverse his defeat, the latest political maneuver seems doomed. Democrats control the House, and many Republicans are expected to vote on Wednesday for certification.

The 11 senators acknowledged that most Democrats and “more than a few Republicans” were likely to oppose their initiative.

Senate Majority Leader Mitch McConnell has called on Republican colleagues to vote to certify and avoid a divisive political battle and say “The Electoral College has spoken.”

Biden won in the important electoral college with a vote of 306 to 232.

Cruz is considered a likely presidential candidate from 2024. Hawley is also said to be positioning for a 2024 run – and so is Pence.