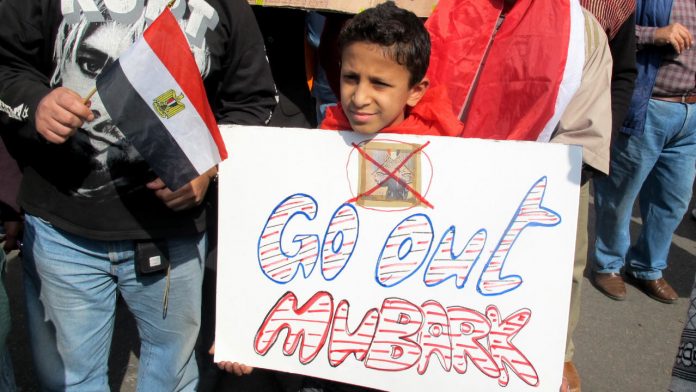 On the tenth anniversary of the January 25, 2011 uprising, the Egyptians returned to the fateful day and revived a hashtag that mobilized protesters to demand the removal of Hosni Mubarak. A decade later, with the country back in the military’s iron grip, the hashtag # Jan25 still has the ability to catalyze the Egyptians with messages of nostalgia and hope.

Ten years and a lifetime ago, as Egypt prepared to mark the annual National Police Day on January 25, a diverse array of online users – including activists, bloggers, citizen journalists and IT professionals – decided to make the event a National Day of Anger .

National Police Day, with its official memorial days and jingoistic exhibitions, has long been the subject of ridicule and dark humor in a country plagued by brutal police work. In June 2010, for example, when a young computer programmer, Khaled Said, was beaten to death in police custody, his friend Wael Ghonim, an Egyptian IT professional living in Dubai, created a Facebook page, We Are All Khaled Said , which quickly gained thousands of followers.

The 2011 police day holiday looked to be different. Weeks earlier, Tunisian protesters had managed to oust strongman Zine al-Abidine Ben Ali. The wind change, lack and revolution were in the air. In Egypt, the discussions on the We Are All Khaled Said Facebook page were discussed along with a handful of other openly demonstrations of Day of Anger.

And thus was born a hashtag and a social movement that would seize the Arab world. Hosseiny was the first to use the hashtag # Jan25, according to tech news site Techcrunch.

In an interview with FRANCE 24, LSE researcher Charlie Beckett called the January 25 protest “the Bastille moment of the Egyptian revolution, which created a symbol that was simple and powerful enough for everyone to gather behind it – much like the fall of the Bastille. the prison had done for the French Revolution of 1789 “.

At the dinner on January 25, 2011, the hashtag attracted more than 25 retweets per minute, overwhelming internet access and sparkling reports of an Egyptian government shutdown on Twitter. Proxies bypassing the blockchain circulated rapidly and messages urging people living near Tahrir Square to unlock their wireless routers were followed. Meanwhile, in the real world, the crowd in Cairo’s central square grew and grew, with protests scattered across the country.

The rest is, as they say, history.

A decade after the January 25 revolution that toppled Egyptian President Hosni Mubarak, the old hashtag was back in circulation on Monday. But the messages lacked the simplicity and clarity of the purpose of # Jan25-tweets 10 years ago.

“I had promised myself not to get too emotional or unpleasant about the 10th anniversary, but in all honesty it is [sic] quite difficult to pretend that I was not harmed by the thought of what was possible and what could have been. # Jan25, says Farah Saafan, a Cairo-based journalist and advocate for animal rights.

I had promised myself not to get too emotional or unpleasant about the 10th anniversary, but in all honesty, it’s pretty hard to pretend I’m not hurt by the thought of what was possible and what could have been. We deserve better. # Jan25

Since coming to power after the ouster of Mohamed Morsi – Egypt’s only democratically elected civilian leader – Abdel Fattah al-Sisi, the country’s former armed forces, chief-turned-president, has been monitoring systematic human rights abuses in Egypt, according to rights groups.

The world’s most populous Arab nation is today at the bottom of international civil rights and accountability indices. Egypt is “one of the world’s largest journalists”, according to the Paris-based journalists Without Borders, which ranked country 166 out of 180 countries in its 2020 press freedom index.

In Transparency International’s corruption index for 2019, Egypt ranks 160 out of 180 countries and Amnesty International recorded 57 executions during the period October-November in what the London-based group called “a frenzy of executions” alone.

“The conclusion of many human rights groups is that the people of Egypt are even worse off than they were back in 2011, when the protests began in Tahrir Square,” explained Jowharforeign policy commentator Philip Turle. Sisi has been monitoring a massive “squeeze against the press, against dissidents, against the opposition, which is basically silencing some form of voice that speaks against the rulers of Egypt,” he noted.

‘Rawest’ and ‘most exciting experience’

Exactly ten years ago, the hashtag #Jan 25 contained simple expressions of exhortation and hope. “It’s unbelievable: a sea of ​​people standing up 2 a sea of ​​cops. I have never seen the Egyptian staff this authorized. Ever. # Jan25, ”a former newspaper editor tweeted with the handle @EnjoyBeingHuman.

@lavietidhar it’s unbelievable: a sea of ​​people standing up 2 a sea of ​​cops. I have never seen the Egyptian staff this authorized. Ever. # Jan25

The last tweet from @EnjoyBeingHuman was on August 17, 2013 – just days after Egyptian security forces attacked Morsi supporters at Cairo’s Rabaa al-Adawiya Square, killing “at least 817 people and more likely at least 1,000”, according to Human Rights Watch , in what the New York-based group called “probable crimes against humanity.”

The dream of democracy, freedom and justice in Egypt died so effectively that a decade later, many Egyptians who took part in the 2011 uprising were still crawling to capture the bittersweet mixture of yesterday’s dreams and today’s defeat.

Ten years later, what remains of # jan25 remains elusive. Old friends overnight become enemies, acquaintances become allies. It is still the rawest, most intimate and most exciting experience, says Hussein Omar, a history lecturer at University College Dublin. “Otherwise oppressed, it comes to me in dreams to this day.”

Ten years later, what remains of # jan25 remains elusive. Old friends overnight become enemies, acquaintances become allies. It is still the rawest, most intimate and most exciting experience of the politics I have endured. Otherwise oppressed, it comes to me in dreams to this day. pic.twitter.com/Y9RdbOoI59

‘I am with the people, not the regime’

Days before the tenth anniversary arose, Hafsa Halawa – a prominent British-based Egyptian-British political analyst who was at the demonstrations in 2011 – posted a defiant message on Twitter.

“Not interested in articles that frame # Jan25 around the current status quo,” Halawa began in a Twitter thread. “Anniversaries should be remembered, and only that,” she noted, adding, “This is a rare opportunity to leave that moment alone for what it was and what it stood for.”

Not interested in articles that frame # Jan25 around the current status quo and the revisionist history since then. Anniversary is to be remembered, and only that. I do not think we need to reflect on the last decade, but simply remember that moment for what it was.

Her tenth birthday was called by Egyptians all over the world.

The former deputy head of state-owned Nile TV told how she refused to read press releases from the Egyptian Interior Ministry and resigned. “I joined the protesters in Tahrir and sent a message to my boss: ‘I am with the people, not the regime. “The best life of my life,” says Shahira Amin.

Ten years ago, I was deputy head of Nile TV but refused to read the press releases from the Ministry of the Interior and resigned. I joined the protesters in Tahrir and sent a message to my boss ” im with the people not the regime. ” best move in my life.

Others, such as an Egyptian who identifies himself as “Mosab still away from home”, remember how he was almost run over by a police car, “but rescued by a stranger I do not know and will forever be in their debt”.

On January 25, ten years ago, thousands of Egyptians, with whom I had the honor of joining, took to the streets to end the police brutality in Egypt, then started a beautiful revolution and fired the dictator who ruled our country. # Jan25

‘I will return to Egypt’

A number of Egyptians who fled the country in the past decade also received the #Jan25 call from exile.

Figures on the number of Egyptians fleeing the regime’s exaggerated human rights are difficult to assess. Data from the World Bank show an increase in emigrants from Egypt since 2011. A total of 3,444,832 remained in 2017 – almost 60,000 more than in 2013. But it is impossible to tell economic migrants from political exile.

Many Egyptians living abroad have chosen to remain silent for fear of security.

But on Monday, many prominent human rights defenders and journalists abroad listened to the #Jan25 call.

Osama Gaweesh, an Egyptian journalist who reported on the 2013 Rabaa massacre of Morsi supporters and was forced to flee to Britain, claimed: “I will return to Egypt one day.”

In a video clip published on Twitter, Gaweesh noted: “I tell my children about the revolution. One day I will return to Tahrir Square, he said. “I think this day is coming soon.”

A decade after my participation in the Egyptian revolution, I still have this hope. The hope that helped us overthrow Mubarak ten years ago.

I tell my children about the revolution. One day I will return to Tahrir Square.

I think this day is coming soon. # Jan25 # 25Jan pic.twitter.com/TRyDejSGE2