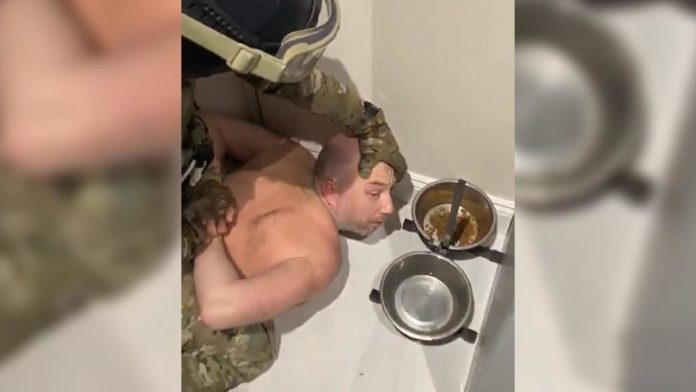 In a video published on Twitter on February 6, you can see the Russian journalist Gennady Shulga lying on the floor in front of him. He is bare-chested, and a man wearing camo gear has a gloved hand on his forehead and aggressively pulls his head back from the floor. In front of Shulga’s face is a dog bowl with pet food in it.

The video publication caused a scream on social media.

Very disturbing video of the police in Vladivostok interrogating and humiliating local journalist Gennady Shulga. The police raided his home and “questioned” him about the opposition protests on 23 January. Particularly noteworthy: the police themselves leaked this material. pic.twitter.com/aEdjfPXnqa

Here is what we can hear in the video, in Russian:

– Do you know why we arrested you?

According to the Russian opposition media Novaya Gazeta, at least four political militants were arrested on February 6. Gennady Shulga was one of them. Shulga runs media NewsBox24 and is an activist and a communist blogger. He is known for covering protests, especially the demonstration in Vladivostok, which was held on January 23 in support of Russian opposition leader Alexei Navalny.

Police dogs are charges against demonstrators who blocked traffic during these demonstrations and broke into Shulgas home on the morning of 6 February as part of the investigation. They took his computer, telephones and other equipment and filmed themselves, forcing him into humiliating positions.

“People saw that the police simply wanted to humiliate me”

In a video published the next day on the YouTube account NewsBox24, he explained on camera what happened and said that the police arrived at his home at 7 o’clock and the whole experience lasted for about two hours. He was then questioned in the anti-extremism department of the local home affairs department, before being released around noon. 13.00.

I was kept on the floor [in my house] and was interrogated as if I were a drug dealer, a rapist or a terrorist. […] I knew they would publish the video because they mentioned it […] although I did not confess any kind in the video.

I think it’s strange that they published it, because when they wanted to humiliate me, they basically humiliated themselves.

When people saw my face next to my dog’s food bowl, there was great outrage. People saw the police doing it and filmed who were just trying to humiliate me. I’m just glad my daughter was not home at the time.

He then tells how the police during the interrogation confirmed that he was a witness to the political events on January 23. For him, his brutal interrogation and the publication of the video afterwards is the result of a “police state”.

Asked by the media Novaya Gazeta, the authorities refused to comment on the video.