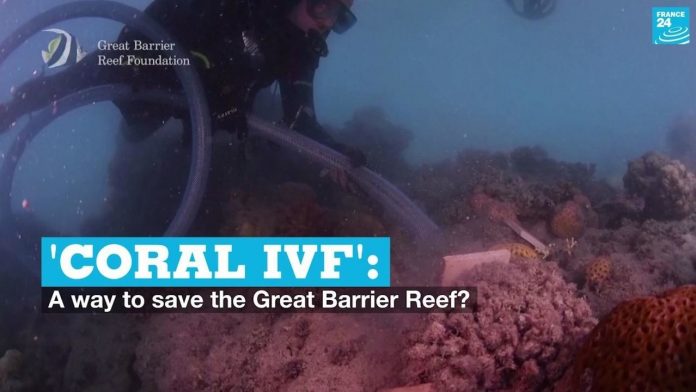 Researchers say a technology called “coral IVF” has shown promising signs that it could be used to repair some of the damage to Australia’s Great Barrier Reef, which has lost more than half of its coral over the past three decades due to global warming, pollution. and other threats to its long-term future.

IVF – in vitro fertilization – technology sees the collection of coral sperm and eggs during the annual mass spawning event on the reef, which is off the coast of northeastern Australia and is on the UNESCO World Heritage List.

These are then used to grow coral larvae in specially designed enclosures.

After about a week, the larvae are distributed to areas with damaged reefs that need living corals.

The tactic was first used just outside Heron Island in 2016 and a survey conducted this month shows that the replanted coral is flourishing with more than 60 new corals in different sizes growing on the reef.

“I’m really excited. We’ve just been to the site in the Heron Island Lagoon, where we put larvae on some parts of the reef in 2016. And we’ve found a lot of very large corals that have grown from those larvae,” said researcher Professor Peter Harrison. to Reuters.

The new coral is healthy, say researchers and even survived a mass bleaching in March.

“This proves that the larval recovery technology works exactly as we predicted and that we can grow very large corals from small microscopic larvae in just a few years,” says Harrison.

Mass bleaching has hit the reef in three of the last five years.

The phenomenon occurs when rising water temperatures destroy the algae that the coral feeds on, which causes them to turn white and in many cases die.

A recent study from James Cook University’s Center of Excellence for Coral Reef Studies found that the reef had lost more than half of its coral since 1995.