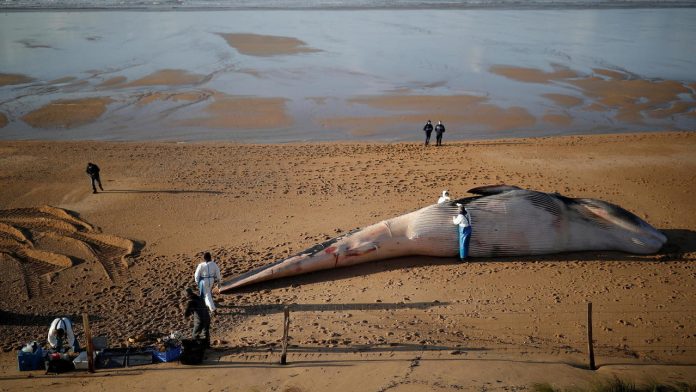 Marine biologists are investigating the deaths of at least six whales found washed up on the western shores of France without any clear signs of being hit by a ship or caught in a trawl net.

Researchers on Monday used a mechanical excavator and long knives to dissect a fin whale, the second largest species of whale after whales, and took samples that they believe could reveal evidence of a viral pathogen.

In an average year, between three and a maximum of 10 whales, dead are deposited on the shores of France, they say.

“We have almost an epidemic or at least an abnormal rise in deaths,” said Willy Dabin, a researcher at Pelagi’s observatory.

The latest Finn whale was found on Friday near Saint-Hilaire-de-Riez. It measured almost 16 meters and weighed an estimated 10 tons.

The common fin whales have all died in the last six weeks. All have been malnourished and shown evidence of bleeding in the heart and respiratory system.

“The question lurking in the background is: are humans a contributing factor in their ability to disrupt the environment?” Sa Dabin. “Either by affecting the availability of food or polluting the living environment, which can make whales more susceptible to disease.”

Officials put guards near the carcass over the weekend to keep interested locals at bay.

“It’s disgusting,” said a local man. “I do not know how to remove it. Cut it up piece by piece?”