Home NEWS After a decade of war, Assad’s presidency is intact but under supervision
Facebook
Twitter
WhatsApp
Linkedin
LINE 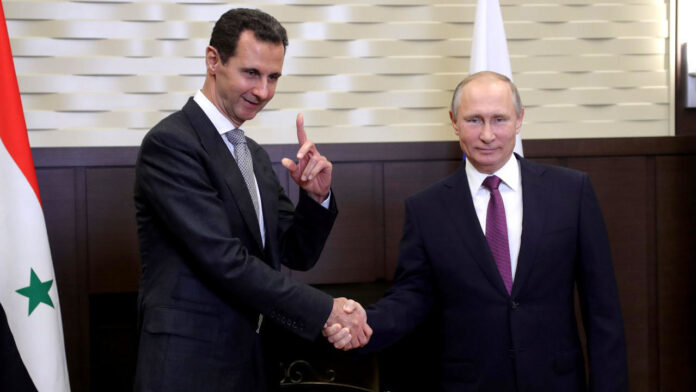 Syrian President Bashar al-Assad may be accused of war crimes and crimes against humanity, but he has managed to save his regime at the expense of Syria’s destruction, thanks to his Russian and Iranian allies. But after ten years of war, is he really Syria’s master?

In the spring of 2011, the discussion about desks in the Middle East in Western capitals was dominated by speculation about how long Syrian President Bashar al-Assad would stay in power. The prevailing view was that it might take a few weeks, a few months, before Syria’s strongman, like his Tunisian and Egyptian counterparts, was ousted by protests sweeping the Arab world.

But a decade after the first demonstrations against his regime broke out, Assad is still in power in a country in physical ruins, economically on its knees and with a population traumatized by an endless conflict. The Syrian war has claimed hundreds of thousands of lives, displaced millions and thrown more than 80 percent of the population into poverty, according to the UN.

Rescued by interventions by his Russian and Iranian allies – with whom he now has to deal in his own country – the Syrian president has regained military control over large parts of Syria, although violent clashes and the presence of jihadists are still a reality in some areas .

Assad may be accused of war crimes and crimes against humanity, but there seems to be nothing stopping the 55-year-old leader, who inherited the presidency after his father’s death in 2000, from winning another presidential election, scheduled for this summer.

A president indebted the Russians and Iranians

“He still has the power and we do not see what alternatives can be opposed to him, especially from a Western point of view. As for his Russian and Iranian allies, they have no reason to replace him. So yes, he won his bid to save his regime,” he said. Fabrice Balanche, a Syria expert at the University of Lyon 2, in an interview with FRANCE 24.

“Unlike [Tunisia’s] Zine al-Abidine Ben Ali, [Egypt’s] Hosni Mubarak or [Libya’s] Colonel Gaddafi, who was all swept away by the Arab revolts, Bashar al-Assad has remained in power by getting his people to pay a high price. We can say that he is under the supervision of his Russian and Iranian protectors, but the fact remains that he really is the Syrian president, it is not Vladimir Putin, it is Bashar al-Assad, “stated Antoine Mariotti, FRANCE 24’s correspondent in Middle East and author of the book “La Honte de l’Occident: Les Coulisses du fiasco syrien” [The Shame of the West: Behind the Scenes of the Syrian Fiasco], published in France last week.

But Ziad Majed – professor at the American University of Paris and co-author of “Dans la tête de Bachar al-Assad” [“In the head of Bashar al-Assad”] – believes that Assad is no longer in control of his fate, not even for the Syrian conflict and its solution.

“Although the resignation of the Syrian president is no longer required by any foreign actor in the conflict, and this issue is no longer a priority as the Russian intervention has secured the regime, Moscow and Tehran have made it clear to Bashar al-Assad that they are his only hope to remain in power, “Majed explained.” And this reality could weaken him if ever – and this is far from the case today – serious negotiations would begin to find a solution with a political transition. “

A “pillar” with limited sovereignty

However, the Syrian president seems to be happy with his limited sovereignty over his own country. “He knows how much he owes the Russians and the Iranians,” Mariotti said. “Without their political, diplomatic and especially military support, it is not certain that he would still be in power today.”

Assad has no choice but to accept the current situation because he needs his allies to protect him on the international stage as well as domestically, to complete the reconquest of Syria. “In the East, they know how to be extremely patient, and Bashar al-Assad certainly plays it to remain indispensable in their eyes,” Mariotti explained. “Finally, what Moscow and Tehran want is the stability of the country, and as long as he can ensure this, the current configuration will remain unchanged, because he is the pillar on which everything rests. ”

While the Syrian territory is affected by several foreign actors in the conflict, such as Russia, Iran and Turkey, which directly or through their allies control parts of the country, Assad’s real power seems to have weakened.

“To understand who controls what in Syria,” Balanche explained, “it is important to look at border control, as it is a marker of sovereignty and a projection of regional power. “Today, the Syrian army directly controls only 15 percent of the country’s borders, in principle the distance that separates Syria from Jordan and a small part of the border in northern Lebanon.”

“This extremely reveals the reality of Bashar al – Assad’s power, because if he were strong and had a choice, he would not let the Lebanese Hezbollah, the pro – Iranian Shiite militias and Russia control the rest of the borders instead of the Syrian army,” Balanche said. “Even when it comes to airspace, Damascus does not control anything because Israeli planes can bomb targets in Syria at any time and normally the Syrian sky should be protected by Russia.”

For Majed “, the regime no longer has a say in a country that is fragmented and occupied by foreign forces because it can no longer do anything other than its prison system and internal policies in the areas it controls. This is all that remains of “Syria’s sovereignty, the state, as it is neither the commander of its defense nor of its diplomacy, modeled on its Russian and Iranian protectors.”

Majed, a French-Lebanese political scientist, compares the reality that Assad’s power has today with the Lebanese authorities during the Syrian occupation of Lebanon’s neighboring country in 1976-2005.

“Ironically, he is treated by the Russians in the same way as the treated and humiliated Lebanese puppet presidents and politicians during the occupation, because he is located for Vladimir Putin, who can beat him in the wrist or call him to Moscow at any time,” Majed said. The Russians, like the Iranians, prefer to have a weakened leader under their control to make him even more dependent on their support, he noted.

Balanche agrees that the situation can be compared to that of occupied Lebanon “in the sense that Syria has become an Iranian – Russian protectorate, and that Moscow is capable of imposing its will on the Syrian president, who is its servant.” Balanche also notes that when Putin calls the Syrian leader to Moscow, “he is not trying to humiliate Bashar al-Assad, while the Lebanese leaders have more obviously been given a mandate to Damascus.”

In this asymmetrical relationship, he continues, the Syrian president is not really in a position to say no to the Russians and is sometimes forced to make concessions. “But he still retains a certain inconvenience of standing up to Moscow and reminds them that, for example, he is still indispensable for delivering information collected by his intelligence services, which is crucial for the security of Russian troops in Syria,” Balanche explained.

Assad “knows that the Iranians and the Russians are obliged to put up with him, because he himself has prevented the emergence of any potential competitor, and he uses this to balance his relations with his two protectors to hang on for a while,” Mariotti said. “No one in the regime can stand up to him and he will succeed in the presidential election himself, and the Russians know this very well.”

The Syrian president has the freedom to get closer to the Iranians when the Russians are too demanding and vice versa, and when there are divisions, Balanche confirms. “He knows how to maneuver between these two protections that are a bit trapped in Syria, where they have to stop after investing a lot. This, with respect to the red lines that have certainly been set for him, is his situation,” he said. explained.

In such a context, it remains to be seen whether Joe Biden’s arrival at the White House can revive the issue of a political transition in Syria because his predecessor, Donald Trump, had completely lost interest in the issue.

“When the Syrian regime was having the hardest time, it was Barack Obama who was in power in the United States and Joe Biden was his vice president,” Mariotti recalled. “Bashar al-Assad understood that he had little to fear, even after large-scale chemical attacks. So he should not be particularly afraid of the Democrats returning to office. Joe Biden does not really want to start a tug-of-war with Moscow over an opposition that almost no longer exists. ”

So, if he is sure of staying in power, can Assad hope for international rehabilitation? Last week, for example, the Foreign Minister of the United Arab Emirates said that harsh US sanctions against Damascus blocked Syria’s reconstruction and undermined regional reconciliation that could end a ten-year war.

“When it comes to rehabilitation, he is clear and guesses that he does not have much hope for the West, as this would require the regime to make concessions that it cannot make in terms of human rights and a political transition,” Balanche noted.

“But Bashar al-Assad can renew ties with Arab countries that seem less closed to this idea than Europeans and Americans,” he said, adding: “Damascus looks in particular at Russia and China, which in their eyes are an alternative model to it. Western and with which Syria can deal economically without the issue of human rights dominating the table. “