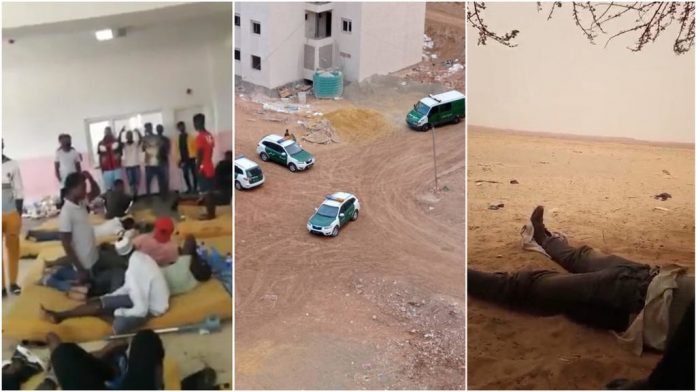 Several photos circulating in various WhatsApp groups show arrests taking place at construction sites in Oran, where many migrants work and sometimes even sleep. In both cases, the arrested people were taken to a detention center and then taken by bus or truck to the border with Niger and left in the middle of the desert. Jacques (not his real name), who is also from Cameroon, has been living in Algeria for the last eight years: On October 7, the police came to my home in Oran. I had my papers, and so did the person I was with, so they left us. But then they went to the neighbor’s house. She had misplaced her papers. They did not give her time to look for them; they just took her away. Now she’s in the desert [Editor’s note: at the border]. Sometimes it does not matter whether you have papers or not; the police do not distinguish.

They do not deport people from Cameroon or Mali or many places back to their homeland. Authorities are just bringing them to the desert on the border with Niger. But why should these people ever stay in Niger? Or go back to their countries of origin? Here in Algeria they have their lives; they have work. So many people pay exorbitant fees to be smuggled back to cities in Algeria.

When there was a wave of arrests, people panicked. The authorities know everything; where “blacks” live, where “blacks” work. So we do not go out, we send each other messages on WhatsApp about what is going on outside and we wait. We’re used to it. It’s always the same story.

Another man, Soufiane (not his real name), who did not tell us what his nationality is, contacted observers on October 12 from Oran’s detention center. A few days later, he was brought to the border between Algeria and Niger and sent our team a video showing several men stranded in the desert. He said he was in Tamanrasset without food and without any way to return to Oran.

Screengrab of the video sent to us by one of our observers, who was brought to the Nigerian border and left in the desert.

Over the past few weeks, Algerian authorities have carried out feuds arresting migrants in Oran as well as Tlemcen, Algiers, Blida, Boumerdès, Tipaza, Zeralda, Sétif and Annaba, according to a report by Human Rights Watch (HRW) dated 9 October. . Some were arrested at home, others on the street, others at their workplace.

HRW estimates that Algeria has deported more than 3,400 migrants from at least 20 different nationalities to Niger, including 430 children and 240 women since early September. According to the NGO, this brings the total number of deportations to Niger over 16,000 by 2020. Just over half of the deported there are actually from Niger.

Between 2016 and 2018, the JowharObservers team documented several waves of arrests targeting people from West and Central Africa.

Fouad Hassam, an activist with the Algerian League for the Defense of Human Rights (LADDH), says these deportations were suspended in 2019 with the Hirak protest movements and then again in 2020 with the Covid-19 pandemic.

“But now they can justify their behavior because they say the number of Covid-19 cases is falling in the country,” he says.

He’s worried that people do not care what happens.

“In 2018, NGOs followed what happened and were able to respond when these mass arrests took place. Today, no one is talking about what is happening.”

Moctar Dan Yaye, head of communications and public relations for Alarm Phone Sahara, an organization that helps migrants trapped in the desert, says these expulsions can be extremely dangerous and that sometimes people get lost in the harsh, disorienting landscape: There are official convoys transporting people from Niger back to their country, and unofficial convoys transporting people of different nationalities back to Niger. These people are then handed over in the middle of the desert. Often they are brought there at night or early in the morning. Then they can see a light in the distance. It is the first village on the Niger side, Assamaka. This is where they’re going. There find the people who work with the International Organization for Migration [Editor’s note: IOM, the UN’s migration agency], which helps organize voluntary repatriation.

Some refuse to go to Assamaka and instead try to return to Algeria. It does not matter what choice they make; some get lost. That’s why we patrol. When I was in Assamaka in January, I saw the grave of an immigrant. I do not know when he died. It is impossible to have statistics on the number of people who died when they got lost in the desert.

This Facebook post from NGO Alarm Phone Sahara (as translated from French) explains that Algeria is still carrying out mass deportations of migrants to Niger. This post mentions a group of people who had been deported from Algeria who arrived in the border city of Assamaka, Niger on October 8, 2020. Human Rights Watch (HRW) has condemned Algerian human rights violations in their treatment of these migrants.

On 1 October, Algerian Interior Minister Kamel Beldjoud announced a new national strategy to combat undocumented migration “in strict compliance with international conventions and treaties signed by Algeria, in particular those concerning respect for human rights and the dignity of migrants”.

Algeria is working with the IOM, and the minister claimed it would ensure that “all the right conditions” would be met during repatriation operations. In a notable example, he quoted that there would be “creation of residential centers, restaurants, transportation and medical care”.

This article was written by Maëva Poulet.