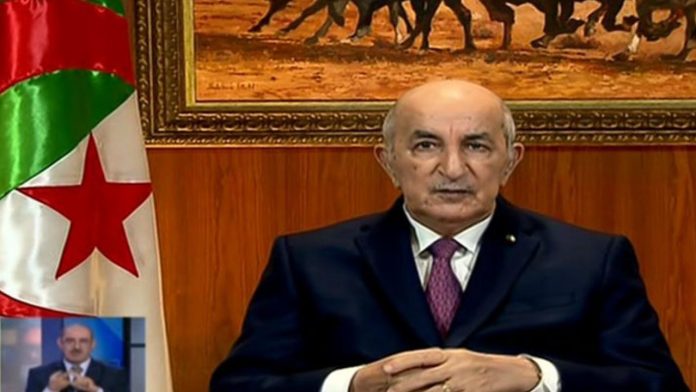 Algerian President Abdelmadjid Tebboune on Thursday announced the dissolution of the lower house of parliament and called for early legislative elections as the North African nation struggles with health, political and economic crises.

In a speech to the nation, Tebboune said he would also carry out a change of government and pardon for dozens of imprisoned activists from the “Hirak” protest movement.

The government has fought to stop renewed Hirak protests.

“I have decided to dissolve the National Assembly and call for elections,” Tebboune said in a speech broadcast on state television.

Tebboune, who has previously expressed dissatisfaction with Prime Minister Abdelaziz Djerad’s cabinet, said the change of government would take place “within a maximum of 48 hours”.

The Algerian government faces several challenges as the coronavirus pandemic increases the wages that depend on an oil-dependent economy.

He also announced an amnesty for dozens of imprisoned members of Hirak, who swept former strongman Abdelaziz Bouteflika from power in 2019.

“The blessed Hirak has saved Algeria,” he said, announcing a “presidential pardon” to about 55 to 60 people, who he said would return to their homes “tomorrow.”

Algeria has been waiting for the implementation of economic and political reforms that Tebboune promised after the subsequent Bouteflika, which resigned in 2019 after mass protests after two decades in power.

The North African OPEC member country has been under financial pressure due to a sharp decline in energy earnings, which has forced the government to cut spending and delay some planned investment projects.

Elected in December 2019, Tebboune has promised to take measures to diversify the economy from oil and gas.

He spent a total of three months in Germany since October receiving treatment for Covid-19 and returning home earlier this month.

About 70 people are currently in jail for their links with the Hirak movement or other peaceful opposition political activity, according to the CNLD Prisoners’ Support Group.

The unprecedented Hirak movement, which called for a thorough overhaul of the ruling system that had been in place since Algeria’s independence from France in 1962, only suspended meetings in March last year under Covid-19 restrictions.

But in recent weeks, demonstrations have been renewed during the construction of the 22nd anniversary of the first nationwide protests, especially in the traditionally recoverable Kabylie region.

Among them was Karim Tabbou, a prominent Hirak figure who was sentenced in December to one year for “undermining national security”.

Tabbou told the crowd that “the last bell has rung for this corrupt system”, which expressed “hope for building a new Algeria: human rights, freedoms and the rule of law”.

Tebboune’s speech to the nation had been highly anticipated and coincided with a national day celebrating the “martyrs” during the 1954-1962 war of independence against French colonial rule.