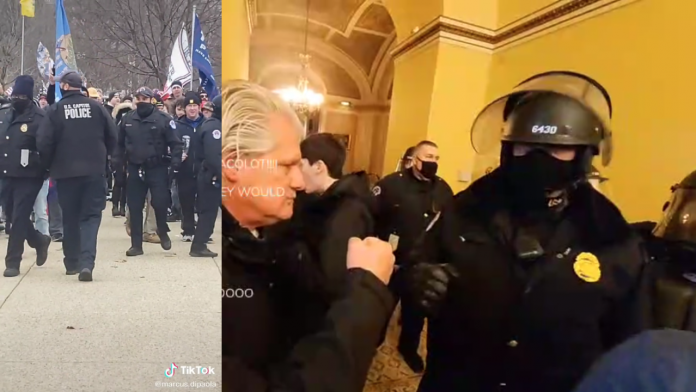 On January 6, President Donald Trump’s supporters marched to the US Capitol in Washington, DC, pushed through barricades and stormed the building in an attempt to prevent the certification of Joe Biden’s election. Videos that are widely shared online show lots of Trump supporters breaking into several entrances and sometimes easily passing through police lines to access the building. Government officials and the public have criticized the police for reacting insufficiently and even being “involved” in the uprising.

Plans by Trump supporters to march on Washington, DC and storm the Capitol on January 6 were widely shared on social media in recent weeks, including TikTok, Twitter and The Donald, a forum for Trump supporters. But when the day came, the police presence outside the Capitol building was not strengthened. Videos of the incident show lots of Trump supporters contemplating police barricades, as well as sharing friendly interactions with officers, which makes many wonder why the police failed to prevent the siege.

The Capitol police went off guard

Photos and videos taken on January 6 show a police force that was grossly unprepared to ward off the thousands of people who intended to reach the Capitol.

This video shows a group approaching barricades in front of the Capitol area just before 1 p.m. The fewer than ten officers stationed at the post could not disperse the crowd that began to push through. The officers tried to keep the barriers in place for several seconds before retreating.

WHOA – The American Capitol siege today began at this very moment – when the Capitol police became completely unpleasant when rioters stormed the fence and surprised them. Where was the backup? Why was the National Guard not preset there? So angry. 😡 pic.twitter.com/rQ2UT4BZTj

When another barricade was reached in front of the Capitol stairs, police and rioters met with both sides exchanging pepper spray and a policeman aiming a blow.

This video, published about 15 minutes after the crowd initially broke into the Capitol foundations, shows police officers equipped with riot gear trying to hold back the crowd of rioters approaching the entrance to the Capitol building. No crowd control devices, such as pepper spray, tear gas or rubber bullets, can be seen in this video.

GOOD: Trump supporters have broken into the Capitol building, tore down four layers of security fences and are trying to occupy the building – fighting federal police overrun

This is the craziest thing I’ve ever seen in my life. Thousands of police officers can not stop them pic.twitter.com/VVdTUwV5YN

Another video shared on TikTok by journalist Marcus DiPaola, who has since gone viral on social media, shows police at another entrance that retreats when the audience has access to the Capitol steps. While this video has been circulated online as evidence that police released protesters into the area, it is not clear if police or protesters moved the barricades. The police still turn away from the mob and retreat to the building.

Once they reached the building, Trump supporters began breaking windows and forcing open doors to gain access to the building’s interior.

At the front door of the Capitol, protesters broke windows to try to gain access. This video shows a lone policeman trying to keep the door closed when a huge crowd pulls it up.

A video from inside the Capitol’s front door shows that no police were present to block this entrance.

When protesters force another entry into the Capitol, several police officers are seen reinforcing an interior door.

Inside, protesters stood in front of the police again as they tried to access areas of the building where the congress met. In this video, officers are outnumbered and can be seen repelling Trump supporters with the help of batons. The audience eventually shoots past the police.

While the protesters were able to enter the Senate chambers, intelligence officers and dressed Capitol police guarded the entrances to the chambers. A female protester was shot and killed by an officer as she tried to climb through a window and enter the safe area. A video posted on Twitter after the incident captured the moment.

After several hours inside the Capitol building, the mob was expelled after law enforcement deployed tear gas and explosive devices.

After about four hours of the MAGA audience’s coup attempt, police are now using tear gas and zippers to disperse the crowd away from the Capitol. pic.twitter.com/Afw7tECT9E

During the infiltration of the Capitol, police were caught on camera taking selfies, punching and shaking hands with protesters.

Streaming photos taken by popular alt-right activist and streamer Tim Gionet, known as “Baked Alaska”, show a police officer giving a fistfight to two Trump supporters as well as Gionet. Despite the exchange of these gestures, the officer tells Gionet “You picked the worst day to come here,” to which the streamer replies, “I’m just documenting.”

Similar exchanges can be seen throughout Gionet’s coverage of the event. Two police officers exchanged a brief handshake with one of Trump’s supporters after announcing “We did our job, let’s go,” in an attempt to disperse the crowd.

Finally, another officer takes a selfie with one of the protesters and seems to give a thumbs up to the camera. When Gionet says “1776 will begin again, brother,” the officer replies, “I think it has already done so.” [Editor’s note: 1776 was the year the Declaration of Independence was signed, making the United States a sovereign nation]

Many online people have drawn a sharp contrast between these interactions with Trump supporters and the police’s response to Black Lives Matter protests in Washington, DC in June last year. During these protests, the National Guard was stationed in large numbers outside national monuments and tear gas and rubber bullets were used on a group of peaceful protesters.

An American congressman was worried that the police were involved in today’s events.

A senior official told reporters on Wednesday that the shootings were imminent at the Capitol Police following the “lack of professional planning” in the handling of the mob. Police authorities said they did not anticipate the size of the prosthesis, and “chemical irritants” was used to break the polisbarrikader, an obvious reference to the pepper spray used by some of the demonstrators.

Although 350 members of the DC National Guard were deployed before the planned march for Trump, many of them were stationed blocks from the Capitol. Another 1,100 troops were called in after the building was demolished.

Four people died and 52 were arrested in the incident, which many call a failed coup. Of the 52 arrests, 47 were for violations of the curfew 18.00 that the DC mayor had introduced after the violation.