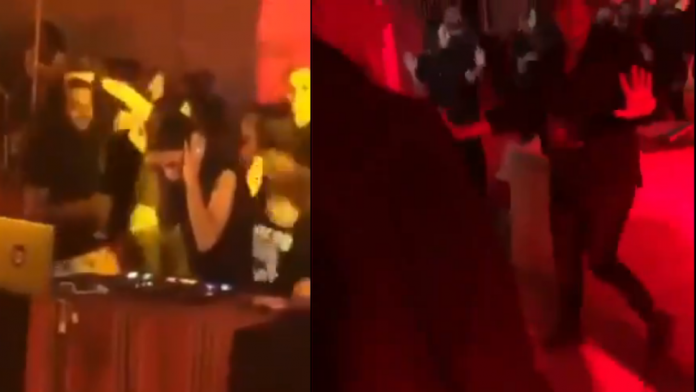 On the evening of Saturday, December 26, a concert at an Islamic shrine, the An-Nabi Musa tomb on the West Bank near Jericho, was broken up by a group of citizens who had heard about the incident via social networks. The organizers claim that they were authorized to use the space, but the DJ has been arrested and the Palestinian Authority has launched an investigation into the event.

Dozens of people gathered at the An-Nabi Musa shrine on Saturday to attend a concert with DJ Sama Abdul-Hadi, who has won international acclaim as one of the first female Palestinian DJs. The incident ended early, however, when it was broken up by a group that opposed the use of the holy site and claimed that there were drugs and alcoholic beverages at the concert.

A pilgrimage destination, the shrine is believed to be the burial place of the Prophet Moses, and contains a mosque. The site dates back to the 12th century and now contains privately managed hotel rooms and a restaurant after renovations completed in 2019 that aimed to increase visitors.

When the news of the concert was shared online, a group of men from Jerusalem went to the scene to expel the participants from the sanctuary. In videos about the event that are shared online, there is little evidence to support the claim that the party was too crowded or provided with alcohol and drugs.

Videos published online show the group of men entering the yard, meeting the concert and demanding that everyone leave. They used fireworks to break up the event after participants hesitated to leave and claimed they had permission to be there.

In this video, which was published on December 26, several men enter the arena and ask the concertgoers to leave. When the woman in the video refuses, they tell her, “Leave or we’ll blow everything up.”

In this video, which was published on December 26, a man lights and throws a firework when the participants leave the place.

Israeli military forces arrived at the scene shortly after the clashes, but an Israeli army spokesman told the Times of Israel that the incident was being handled by the Israeli police and Palestinian Authority.

Anger began to erupt online after rumors spread that the concert had been approved by the Palestinian Ministry of Tourism or the Ministry of Religious Affairs, the two bodies involved in the sanctuary’s renovation project. Both parties denied the allegations.

However, e-mail records obtained by New Arab showed communication between the concert organizers and the Ministry of Tourism, which manages the areas of the holy site outside the mosque. These emails show that the ministry approved the request to use the sanctuary for a performance, provided that the event respects general security measures, the site’s rules and its religious and cultural significance.

Members of Abdul-Hadi’s team told New Arab that the event at the sanctuary was part of one of DJ’s ongoing projects to broadcast concerts from historical and cultural landmarks in the West Bank to draw attention to them. The performance was part of a global project to promote the cultural heritage of the Middle East through electronic music concerts broadcast on platforms such as Beatport and Twitch.

They also claimed that there were no alcoholic beverages or drugs present at the concert, which took place in the courtyard of the sanctuary, not in the mosque.

The day after the incident, Israeli police set up a roadblock outside An-Nabi Musa, but that did not stop dozens of Palestinians from accessing the shrine to hold afternoon prayers and clean the place.

Israeli security forces guarded the An-Nabi Musa shrine on December 27 as people gathered to clean up the place and pray.

A group of people were seen collecting remnants of the previous night’s event, as well as furniture from the site’s hotel rooms and burning them. The group opposed the use of the sanctuary for tourism purposes, in particular the management of hotel rooms by a private company and the use for private events.

A video posted on Facebook on December 27 shows a group collecting mattresses and other furniture from the sanctuary’s hotel rooms in a pile.

The furniture and other items left over from the previous night’s event were taken outside the sanctuary to be burned.

Palestinian Prime Minister Mohammad Shtayyeh has launched an investigation into the incident. DJ Abdul-Hadi was arrested by the Palestinian police on December 27 for his role in organizing the concert. On December 29, her detention was extended for 15 days pending investigation.

Several human rights organizations have called for Abdul-Hadi’s release. According to Ammar Dweik, director general of the Independent Commission on Human Rights, an organization created by the Palestinian Authority, Abdul-Hadi had been given permission to hold the concert. “An-Nabi Musa is not only a religious place but also a tourist attraction […] and if electronic music was not appropriate there, the ministry should not have given its permission, he tells AFP.

Saturday’s events took place despite a curfew imposed on the West Bank to counter the spread of Covid-19.