Home NEWS Anti-capitalist and environmental groups are protesting against the expansion of the Amazon...
Facebook
Twitter
WhatsApp
Linkedin
LINE 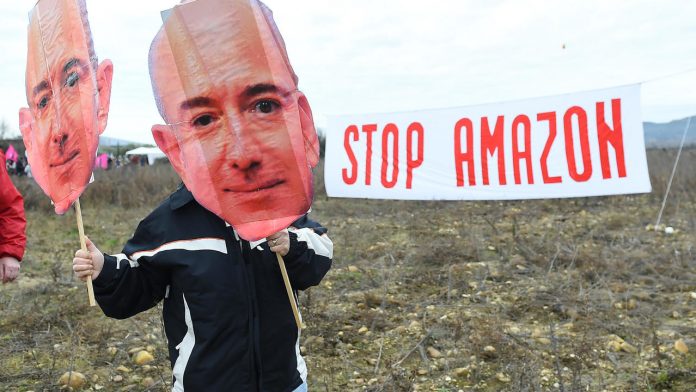 Hundreds gathered in several French cities on Saturday in protests against Amazon called by anti-capitalist and environmental groups, including in a place where the American e-commerce giant is planning a massive stockpile.

Amazon plans to build a 40,000-square-foot facility in the small southern town of Fournes near the Pont du Gard, a World Heritage-listed Roman aqueduct bridge.

A crowd of police said there were about 800 and which organizers were estimated at 1400 gathered at the site and planted shrubs in front of large banners with the text “Stop Amazon” and “Not here or anywhere”.

They formed a human chain to show the size of the project, while multicolored balloons floated 18 meters upwards to indicate the height of the planned five-story facility.

“For two years, the citizens of Fournes and its environs have been fighting against the installation of a giant Amazon warehouse,” said Raphael Pradeau, a spokesman for French citizens’ activist group Attac.

“In the beginning, they were a bit lonely against everyone, but they have managed to stop the project thanks to legal action.”

“We want to show that these are not small isolated fights and that we can mobilize hundreds of people who are ready to return to stop the work,” Pradeau said.

Sarah Latour, 38, came with her two sons, ages eight and six, and the family planted a bush in the wilderness, where vines had once been grown.

“These plants, these shrubs that we plant today, are a symbol of life that contrasts with the concrete that Amazon practices,” she said.

“I came with my children because I do not want this destructive model for them.”

About 200 people also gathered outside an Amazon facility in Carquefou, a suburb of the western city of Nantes, organizers said.

“We condemn Amazon for destroying more jobs than they are creating, and that these are precarious jobs,” said Sophie Jallier, spokeswoman for the organizers of Carquefou.

In the eastern city of Ensisheim, about 100 people gathered to protest against a plan to build a giant warehouse on a 15-hectare site with former agricultural land.

“Today we condemn an ​​economic system that is at the end of its rope and using the planet,” said Isabelle Schaeffer, a member of an environmental group in the Sud Alsace region.

Other protests were held in Augny, in the eastern Moselle region and in Perpignan in the south.

Amazon is “unfairly competitive with companies that pay their taxes in France”, says Eric Barbier from the Alteratiba environmental group in Perpignan.

In addition, “most workers are on precarious contracts, hired during peak periods such as Black Friday or Christmas and then thrown out.”