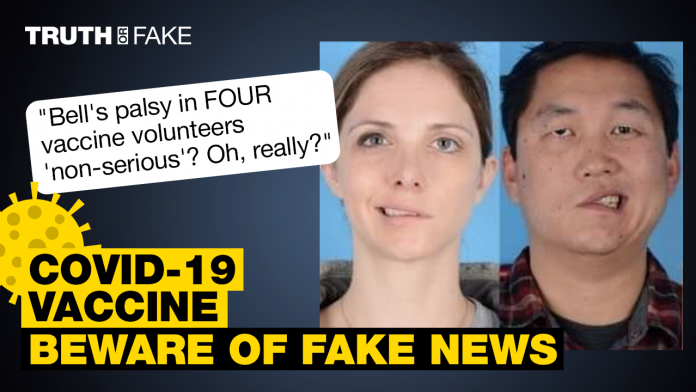 False news about Covid-19 vaccines is already circulating on social media just a few days after several countries have launched their campaigns. Many people are worried about potential nasty side effects, while others accuse the media of lying about it. In this series, the JowharObserver team receives some of the most widespread rumors. In this article, we investigate rumors about the four people who developed Bell’s palsy, a type of facial paralysis, during studies for the Pfizer-BioNTech vaccine.

On December 8, the UK rolled out the Covid-19 vaccine manufactured by the American pharmaceutical company Pfizer and its German partner BioNTech. It was briefly followed by the United States and Canada, which began distributing the vaccine on December 14. Bahrain and Mexico have also approved the Pfizer BioNTech vaccine. This was followed by approval by the European Medicines Agency on 21 December and rollout in Europe on 27 December.

3 – Were there really four people who got facial paralysis after receiving the vaccine?

On Facebook, a large number of people anxiously circulated a report on vaccine trials published on December 10 by the American Food and Drug Administration (FDA) that four people who participated in trials for the Pfizer-BioNTech vaccine developed a form of temporary facial paralysis called Bell’s palsy. This condition occurs when the nerve that controls your facial muscles becomes compressed or inflamed due to a bacterium, virus or other disease or trauma.

In most cases, the paralysis disappears after several weeks or several months. According to the National Institute of Neurological Disorders and Stroke in the United States, Bell’s palsy can affect people of all ages. Risk factors include pregnancy, obesity, high blood pressure, diabetes and upper respiratory problems.

A large number of people took to social media to share a screenshot of the FDA document and a photo showing three people who have Bell’s palsy.

But if you run this picture of the three people suffering from facial paralysis through a reverse image search (check out our guide to find out how), the pictures appear in several places. First, it appears on the website of the British Medical Journal (BMJ) on a page explaining Bell’s paresis, which was last updated in November 2019.

The image is also shown in a video published on January 23, 2020 on an Indonesian YouTube channel. So the picture was online long before the FDA report was published on December 10.

However, the posts contain some truth. The FDA document, which analyzes the results of clinical trials conducted by Pfizer-BioNTech laboratories, states that of the 22,000 people who received the Covid-19 vaccine, four developed Bell’s palsy. There were no cases of facial paralysis among the placebo group, volunteers who received a neutral substance instead of the vaccine as a comparison method. The FDA said that when the vaccine is distributed more widely, doctors should monitor the development of this condition.

But the report makes it clear that cases of Bell’s palsy are not actually a side effect of the vaccine. While it is noted that there were more cases of Bell’s palsy in the group that received the vaccine, it states that it is impossible to determine if there is a cause and effect relationship due to the low number of cases, which also represents a similar frequency of the condition. prevalence in the general population. “

In summary, although it is true that four of the 220,000 people who took the vaccine during the trial developed Bell’s palsy, the data collected by the FDA do not show evidence of a clear link between the vaccine and the development of this condition.

Social media users were also concerned that six people died after participating in the Pfizer-BioNTech vaccine trials. That’s true, but they did not die as a result of the vaccination. The FDA document states that of the six people who died after participating in the trials, four were in the placebo group, which means that they did not receive the vaccine at all. So it is not correct to link their death to the tests.

What do we know about the side effects of the vaccine?

The FDA stated in its December 10 report that the most important side effects for patients taking the vaccine were fatigue, headaches, chills, aches and fevers. There were also eight cases of appendicitis among those who received the vaccine, compared with four in the placebo group. However, the FDA says that this is probably a random event that is not related to the vaccine.

The day after the vaccination campaign began in the UK, officials reported that two people had experienced severe allergic reactions to the vaccine.

The Medicines and Healthcare Products Regulatory Agency (MHRA), a British government agency, published a recommendation that people who have a history of severe allergic reactions to vaccines, medicines or food (people who carry the epi-ep in the event of an anaphylactic reaction, for example) should not be vaccinated. Researchers emphasized the fact that this type of reaction can occur in rare cases with all vaccines.