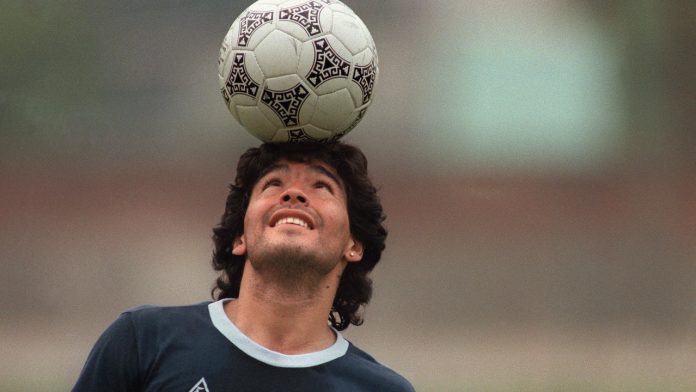 Argentine football legend Diego Maradona has died of a heart attack at the age of 60, his spokesman announced on Wednesday.

The announcement came two weeks after Maradona was released from a Buenos Aires hospital after undergoing surgery to remove a blood clot in her brain.

Alongside Brazil’s Pele, Maradona is widely regarded as one of the greatest footballers of all time.

From poor to rich

Maradona rose to stardom from a dismal Buenos Aires slum to lead Argentina to World Cup victory and was a torn-to-riches story in his footballing homeland and gained the iconic status of his Argentine Che Guevara and Evita Peron.

One of the most talented football players in history, Maradona’s highlight of glory came when he was captain of Argentina to win the 1986 World Cup before plunging into misery when he was kicked out of the 1994 World Cup for doping.

Years of drug use, overeating and alcoholism shortened a star career and changed his appearance from the agile athlete who could easily slalom through teams to a bloated addict who almost died of cocaine-induced heart failure in 2000.

But he invented himself in a fantastic comeback in 2008 as coach of the Argentina team and convinced managers that with pure charisma he could inspire the team to victory, despite a lack of coaching experience.

A magician with the ball, Maradona was worshiped as ‘El Dios’ – God – partly a pun on his jersey number 10, ‘El Diez.’

He was largely responsible for Argentina’s 1986 World Cup victory in Mexico and scored two famous goals in a match against England in the quarterfinals.

The first was a notorious goal made with his fist, and the second, in which he dribbled over half of England’s team, is often called the goal of the century.

“It was partly by God’s hand and partly by Maradona’s head,” he said of his opener in the 2-1 victory.

Childhood in a small town

Born on October 30, 1960 in Buenos Aires’ working class suburb of Lanus, the fifth of eight children of a factory worker, Maradona grew up in Villa Fiorito shanty town.

His mother Dalma, known to her fans as “Dona Tota”, saw a star reflected on the floor of the church where her son was baptized and imagined a bright future as an accountant.

But Maradona’s love affair with football was obvious from the start. Considering his first football as an infant, he slept with it under his arm.

The prodigy was discovered in street kickabouts by the scout for the first division club Argentinos Juniors and made his league debut 15.

At 5 pm, he just missed being included in Argentina’s 1978 winning squad at home. In the 1982 tournament in Spain, a broadcast against Brazil was a fitting prologue to two unfortunate seasons in Barcelona, ​​terrified of hepatitis and injury.

But then came liberation and victory. In 1984, he moved to Naples for a then world record $ 7.5 million contract. Maradona helped underdogs Napoli to the Italian title twice – creating a whole new set of admiring fans in the process.

And after the 1986 World Cup triumph in Mexico, he also attracted a mediocre Argentine team to a second consecutive World Cup final in Rome in 1990.

But in 1991, drugs and alcohol began to take over his life.

That year, Maradona received a 15-month suspension from football worldwide for doping and was summoned to a trial in Naples due to alleged links to a deputy ring.

He was banned again for 15 months after testing positive for drugs at the 1994 World Cup in the United States.

The compact 5-foot 4-inch (1.65 m) player with dark curly hair and a tough attitude in his jaw surrounded himself with an entourage of yes-men and became known for his sharp heavy confrontations with reporters and critics.

Over the years, he publicly reflected on his greatness and weaknesses, published photo books and quotes about himself and hosted a TV show.