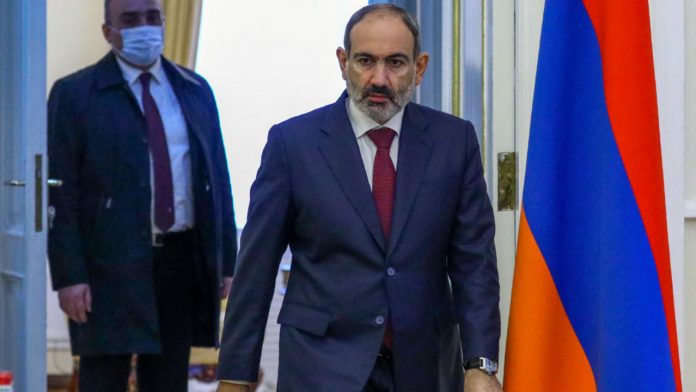 Armenian leader Nikol Pashinyan accused the military of attempting a coup and urged supporters to take to the streets on Thursday, after months of tension over his handling of last year’s war with Azerbaijan.

The country’s main military brass had earlier on Thursday demanded the resignation of the Prime Minister, and began a potential power struggle in the Caucasus nation.

Pashinyan condemned the statement as a coup attempt and urged supporters to demonstrate.

“I consider the statement from the General Staff of the Armed Forces an attempt at a military coup. I invite all our supporters to Republic Square right now,” he wrote on Facebook, referring to a central square in the capital Yerevan.

Pashinyan also fired Chief of General Staff Onik Gasparyan after his office released a statement demanding that the prime minister and his cabinet resign following the dismissal of Deputy Chief of Staff Tigran Khachatryan on Wednesday.

The statement said the shooting was done “solely on the basis of Pashinyan’s personal feelings and ambitions”.

Pashinyan and his government “are not capable of making adequate decisions,” the statement said, condemning “attacks by authorities aimed at discrediting the military.”

Kremlin spokesman Dmitry Peskov said Moscow was concerned about the events in Yerevan and called for calm.

Pashinyan has been under pressure since signing a Russian-mediated peace deal that ended the conflict over Karabakh, an ethnic Armenian region that broke free from Azerbaijan’s control during a war in the early 1990s.

New fighting broke out across the region in late September with Azerbaijani forces backed by ally Turkey making steady gains.

After six weeks of clashes and bombings that claimed about 6,000 lives, a ceasefire agreement was signed that handed over parts of the territory to Azerbaijan and enabled the deployment of Russian peacekeepers.

Azerbaijan regained control of several regions around Karabakh that had been seized by its separatist forces during the 1990s war and the strategically and symbolically important city of Shusha.

The agreement was seen as a national humiliation for many in Armenia, although Pashinyan has said he had no choice but to agree to or suffer even greater losses.

It met with protests in the capital Yerevan, where protesters stormed government offices the night it was signed and has continued to gather regularly.

Pashinyan has rejected calls for resignation and early elections despite construction pressure.

The 45-year-old former newspaper editor came to power who led peaceful protests in 2018 and initially brought a wave of optimism to Armenia, a deeply poor former Soviet state that also borders Iran, Georgia and Turkey.

But his handling of the war has provoked harsh criticism from Pashinyan’s political opponents, including former leader Serzh Sarkisian, who was forced to resign in 2018.