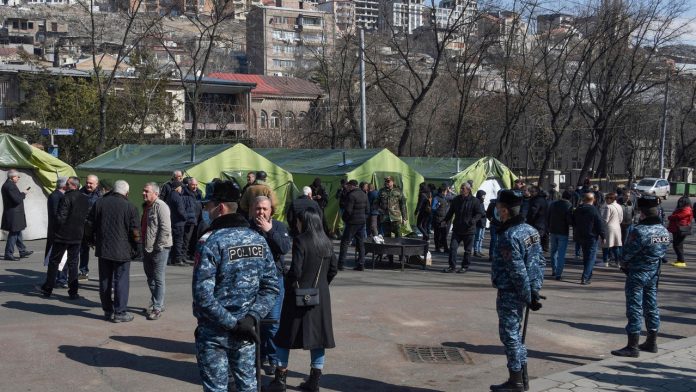 The small South Caucasus nation plunged into a new political crisis on Thursday when Pashinyan defied calls for resignation, accused the military of attempting a coup and gathered about 20,000 supporters in the capital Yerevan.

The opposition gathered about 10,000 of its own supporters, who pitched tents outside the parliament building, erected barricades and promised to hold demonstrations around the clock.

On Friday morning, opposition supporters blocked streets near the parliament building as they prepared to hold a new demonstration at 0900 GMT.

Opposition leader Dashnaktsutyun Gegham Manukyan told reporters that opposition parties would only talk to Pashinyan about “his resignation.”

Pashinyan has said he is ready to start talks with the opposition to remove tensions, but also threatened to arrest any opponents if they break the law.

Pashinyan has come under heavy criticism since signing a peace deal brokered by Russia that ended the conflict over Nagorno-Karabakh, an ethnic Armenian region that broke away from Azerbaijan’s control during a war in the early 1990s.

New fighting broke out across the region in late September with Azerbaijani forces backed by ally Turkey making steady gains.

After six weeks of clashes and bombings that claimed about 6,000 lives, a ceasefire agreement was signed that handed over significant territory to Azerbaijan and enabled the deployment of Russian peacekeepers.

The agreement was seen as a national humiliation for many in Armenia, although Pashinyan has said he had no choice but to agree or see his country’s forces suffer even greater losses.

The Armenian military had supported Pashinyan for several months, but on Thursday the military’s staff joined in urging him to resign, saying in a statement that he and his cabinet “could not make adequate decisions”.