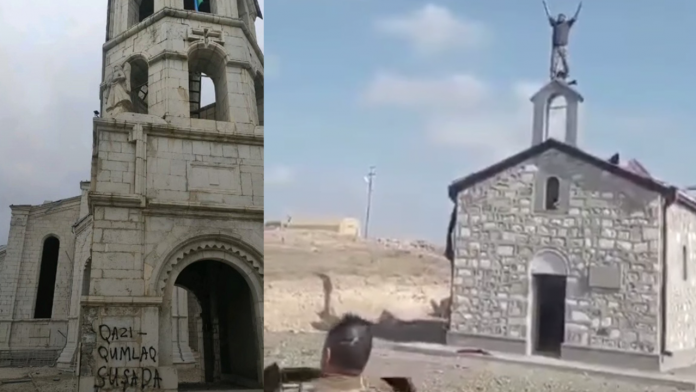 Armenians are terrified that important cultural heritage in Nagorno-Karabakh will be destroyed after Armenia agreed to withdraw from the disputed territory as part of a peace agreement signed with Azerbaijan. Armenians have circulated images of damaged statues and churches on social media, while Azerbaijanis have responded with images of mosques used as pigs. Although no Armenian landmarks have been completely destroyed, many are afraid that their destruction is imminent.

The Armenian ambassador to the Netherlands, Tigran Balayan, took to Twitter on November 14 to share a video of a man he claimed was a jihadist mercenary shouting “Allahu Akbar” from the bell tower of a church. You can see that the watch has been removed and the cross has been broken.

The video, which has been shared hundreds of times, was actually filmed in Nagorno-Karabakh. Our team ran the video through a reverse image search, which revealed that it was Saint Mary Church, located near the village of Mekhakavan (Jebrayil).

A photo, published on Tiktok on November 11, shows Ghazanchetso’s Cathedral in Chouchi covered in spray paint.

Armenian media Zatonk Media said in a tweet that this statue of an angel came from the same church and that it had been destroyed by Azerbaijanis.

This photo was generally circulated out of its original context. Ghazanchetsot Cathedral, classified as a UNESCO World Heritage Site, was severely damaged by an air strike on October 8, 2020, as we explained in a previous article.

The statue was destroyed during these airstrikes, as shown in a photo published on October 12 by the Russian media Daily Storm.

No graffiti appears in a video of the cathedral filmed by Azerbaijani troops and posted on Instagram just hours before the image showing the graffiti damage was published by TikTok.

Azerbaijani troops peeled the bust of an Armenian national hero?

This video published on Telegram on November 9 shows Azerbaijani soldiers destroying a bust of Garegin Njdeh, an Armenian national hero.

We did not find any evidence that this video has been published online before. Some social media users claimed that it was filmed in an Armenian military base in the Qubadli region of Nagorno-Karabakh, but their allegations have not been verified. Azerbaijani social media users reacted quickly to the video, highlighting Garegin Njdeh’s links to Nazism.

Azerbaijani’s social media users responded quickly to these posts, emphasizing how Armenian authorities treated mosques in Nagorno-Karabakh after Armenia took control of the region in 1993. Hikmet Hajiyev, an adviser to the Azerbaijani president, accused the Armenians of building a mosque to a pigsty.

Click here to see the full text of the book “ممار” in ب ربيبن جوبادلي بربيبان. The default of the default setting is to specify the default value and the default value of the column. نحن ندعو @ UNESCO, @ICESCO_Ar, @OIC_OCI اتخاذ الإجراءات / إدانة هذه أ pic.twitter.com/giMveC4fZl

Hajiyev claimed that the photos he published online were taken in the village of Mamar in the Qubadli district. A video circulated by an Azerbaijani TV channel shows pigs. There is some information available about this mosque, in addition to an archive photo from the Ministry of Culture that was published by a press agency on October 23. The mosque’s Wikipedia page was created on October 28.

This is not the first time that Azerbaijani officials have posted pictures on social media of destroyed mosques filled with cattle. The Azerbaijani Consulate General in Los Angeles published a video on YouTube on April 16 showing cows in Agdam’s mosque in Nagorno-Karabakh. The post was intended to illustrate how disrespectful the Armenians were to Azerbaijani’s cultural heritage.

Other pictures, published on an architecture blog, however, show that the mosque had been abandoned and that the cattle had migrated in on their own.

Azerbaijan President Ilham Aliev promised in a telephone conversation with Russian President Vladimir Putin on November 14 that Armenian churches in Nagorno-Karabakh would be protected.

However, our team spoke to human rights activist Simon Maghakyan, who said he did not think this telephone conversation was enough to protect Armenian cultural heritage in Nagorno-Karabakh. Maghakyan lives in Denver, Colorado. Back in 2005, he documented the destruction of the Armenian cemetery Djulfa in the Azerbaijani enclave of Nakhitchevan, which borders Iran.

It is difficult to know whether sites have already been damaged in Nagorno-Karabakh as there are very few observers on the ground. The large monasteries, such as the one in Dadivank, will probably not be targeted in the beginning. But smaller churches and khachkars – which are carved, memorial staves bearing a cross that are very common in Armenian culture – can easily be destroyed. That was the case in Djulfa.

In the past, Azerbaijan has worked to restore and preserve Armenian churches within its territory, such as Saint Mary Church in Gabala. Maghakyan pointed out, however, that writing in Armenian had been removed from the church during this process.

Instead of recognizing some of these structures as Armenian, Azerbaijan has attributed to them the Kingdom of Albania, a Christian kingdom that originated in the East Caucasus during antiquity in what is now part of Azerbaijan. Azerbaijan’s Minister of Culture Anar Karimov did just that in a tweet on November 11, referring to the Armenian Dadivank Monastery in Nagorno-Karabakh with his Azerbaijani name, Khudavang.

#Khudavang Monastery is one of the best testimonies from the ancient Caucasian civilization in Albania. This complex was built by the wife of the Albanian prince Vakhtang in the Kalbajar region of Azerbaijan. 2 chapel pic.twitter.com/ZrmVLztPQS

After six weeks of fighting in Nagorno-Karabakh, Armenia and Azerbaijan signed an agreement to end hostilities on November 9 in an agreement between Russia.

Azerbaijan controlled Nagorno-Karabakh until the 1990s war, which left the disputed territory under the control of ethnic Armenian separatists. The 2020 deal returned part of the disputed region to Azerbaijan control. Russian peacekeepers will be deployed to the Armenian part as well as along the front lines.