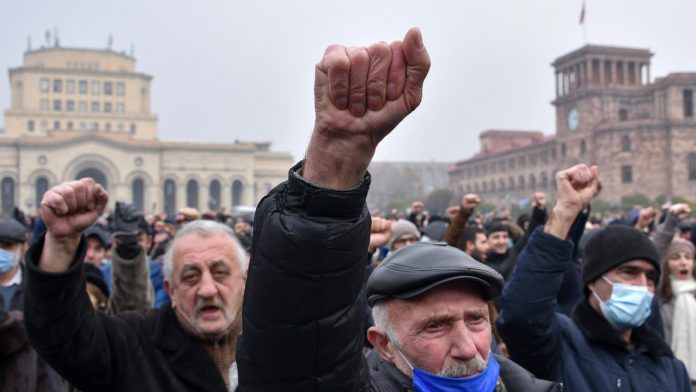 Thousands of people took to the streets of the Armenian capital again on Tuesday, demanding the resignation of the Prime Minister because of his handling of the Nagorno-Karabakh conflict with Azerbaijan.

Armenian opposition politicians and their supporters have been calling for Prime Minister Nikol Pashinyan to resign for several weeks after signing a peace deal that halted 44 days of deadly fighting at the expense of territorial concessions to Azerbaijan.

Lots of protesters on Tuesday besieged government buildings in Yerevan and chanted “Nikol, go away!” In other parts of Armenia, it was reported that protesters had blocked several major roads. Several hours into the rally, opposition supporters set up tents in Yerevan’s main square.

We have set up the tents and intend to stay as long as possible, including overnight. Pashinyan must resign, “Ishkhan Saghatelyan, a member of the opposition Dashnaktsutyun, was quoted as saying by the Russian state news agency Tass.

The opposition also called on Pashinyan’s coalition My Step, which currently holds a majority in parliament, to sit down for talks on Tuesday. My step so far has not commented on the proposal.

Nagorno-Karabakh is located within Azerbaijan but has been under the control of ethnic Armenian forces supported by Armenia since a separatist war there ended in 1994. That war left Nagorno-Karabakh itself and significant surrounding territory in Armenian hands.

Fierce fighting broke out in late September in the largest escalation of the decades-old conflict between Armenia and Azerbaijan, killing more than 5,600 people on both sides.

>> The human cost of Armenia’s defeat in Nagorno-Karabakh

A peace agreement with Russian mediators, which entered into force on November 10, stipulated that Armenia would relinquish control of certain areas it holds outside the borders of Nagorno-Karabakh. Azerbaijan also retained control of areas in Nagorno-Karabakh it had taken during the conflict.

The peace agreement was celebrated in Azerbaijan as a great triumph, but triggered outrage and mass protests in Armenia where thousands repeatedly took to the streets. Pashinyan has defended the deal as a painful but necessary measure that prevented Azerbaijan from surpassing the entire Nagorno-Karabakh region.