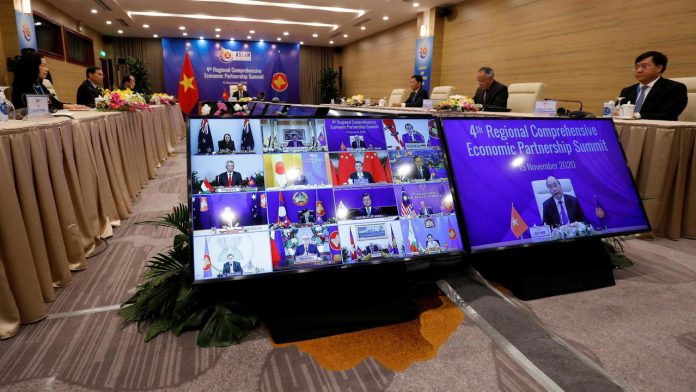 The signing of the Regional Comprehensive Economic Partnership (RCEP) at a regional summit in Hanoi is another blow to the group run by former US President Barack Obama, whom his successor Trump left in 2017.

In the midst of questions about Washington’s involvement in Asia, the RCEP can strengthen China’s position more firmly as an economic partner with Southeast Asia, Japan and Korea, putting the world’s second largest economy in a better position to shape the region’s trade rules.

The United States is absent from both the RCEP and the successor to the Obama-led Trans-Pacific Partnership (TPP), leaving the world’s largest economy by two trading groups spanning the fastest growing region on earth.

However, the RCEP can help Beijing reduce its dependence on overseas markets and technology, a shift accelerated by a deepening divide with Washington, said Iris Pang, ING’s chief economist for Greater China.

RCEP groups the ten members of the Association of Southeast Asian Nations (ASEAN), China, Japan, South Korea, Australia and New Zealand. The aim in the coming years is to gradually reduce tariffs across many areas.

The deal was signed alongside an online ASEAN summit held as Asian leaders address tensions in the South China Sea and address plans for a post-pandemic economic recovery in a region where US-China rivalry has increased.

During an unusual ceremony, which was held practically due to the coronavirus pandemic, the leaders of the RCEP countries alternated behind their trade ministers as one by one signed copies of the agreement, which they then triumphantly showed to the cameras.

30% of the global economy

“The RCEP will soon be ratified by the signatory countries and enter into force and contribute to the economic recovery following the COVID pandemic,” said Nguyen Xuan Phuc, the Prime Minister of Vietnam, who hosted the ceremony as ASEAN President.

Although he was outside the RCEP and had been in the administration that ran the TPP, President-elect Joe Biden – Obama’s vice president – is unlikely to rejoin the TPP at any time, analysts said, as his government must prioritize COVID management. 19 outbreak at home.

“I’m not sure there will be much focus on trade in general, including efforts to rejoin the ‘TPP successor grouping’, for the first year or so because there will be such a focus on COVID relief,” Charles said. Freeman, senior vice president of Asia at the U.S. Chamber of Commerce, said this month.

The RCEP “will help reduce or eliminate tariffs on industrial and agricultural products and establish data transfer rules,” said Luong Hoang Thai, head of the multilateral trade policy department at Vietnam’s Ministry of Industry and Trade.

The pact will enter into force when enough participating countries have ratified the agreement within the next two years, Indonesia’s trade minister said last week.

For China, the new group, including many US allies, is a storm that is largely due to Trump’s withdrawal from the TPP, said ING’s Pang.

India withdrew from the RCEP talks in November last year, but ASEAN leaders said the door remained open to join.

More bloodshed as violence in Gaza, Israel and the West Bank

hanad - May 15, 2021
Israeli planes renewed the airstrikes in Gaza early Saturday and Hamas militants responded by firing rockets at Israel as their fight went into a...

Chinese spacecraft successfully lands on the surface of Mars