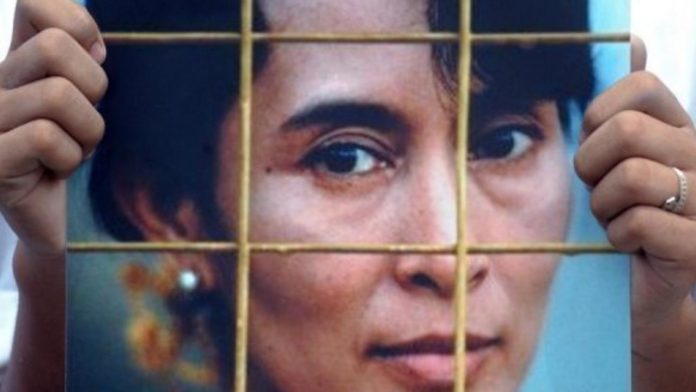 Myanmar’s army detention of de facto leader Aung San Suu Kyi on Monday marks the fall of an icon whose history has been marked by the country’s high and low levels, both at home and abroad. Nobel Peace Prize winners rose to lead Myanmar in 2015 after spending most of two decades under house arrest. But Suu Kyi’s position abroad was severely damaged by her handling of the Rohingya crisis.

Suu Kyi – who has been compared to Nelson Mandela, Gandhi and Martin Luther King – took up his country’s struggle for democracy in 1988 during a popular uprising against decades of military rule. She soon became internationally known and won the Nobel Peace Prize in 1991 while under house arrest, where she would stay for a total of 15 years before finally coming to power in Myanmar in 2016.

Her dramatic story was widely admired. French director Luc Besson’s movie “The Lady” brought Suu Kyi’s epic story to the silver screen in 2011, a year before she was released and began writing a new chapter in her country’s history.

But the foreign adulation would not hold. Once in power in Myanmar, Suu Kyi’s conspicuous refusal to act in defense of the Rohingya community astonished the international community that had once sung her praise. Although Suu Kyi remained popular in Myanmar, she became a persona non grata on the world stage. And now, at the age of 75, she is once again a political prisoner.

Suu Kyi felt a coup in recent days, resumed her familiar role as a resistance fighter, and issued a preliminary call the day of her arrest for the people of Myanmar “not to accept a coup” and said an army. takeover would put the country “back under a dictatorship”.

“I urge people not to accept this, to react wholeheartedly to protest the military coup,” the statement was attributed to Suu Kyi, posted on the Facebook page of her National League for Democracy party.

Suu Kyi’s detention is the latest twist in a life that began with a tragedy. In 1947, when Suu Kyi was only two years old, her father – the charismatic independence hero General Aung San – was assassinated. Suu Kyi would long live in exile, especially in India and later in Britain, Myanmar’s former colonial lord, where she attended Oxford University. It was there that she met her husband, academic and Tibet specialist Michael Aris, with whom she had two children.

Since 1988, Suu Kyi’s life has taken a fatal turn. After returning to her homeland to be by her dying mother’s side, Suu Kyi took everyone by surprise when she became involved in the Burmese people’s uprising against the military junta.

“I could not, like my father’s daughter, be indifferent to everything that happened,” she said in a speech in August 1988 marking her entry into political life.

About 3,000 people died in the repression of the uprising. It would also mark the birth of an icon. Suu Kyi became the woman through whom democracy could one day return to Myanmar and in which a people, under the jackpot of the military dictatorship since 1962, could invest their hopes.

Suu Kyi was granted permission to form the National League for Democracy (NLD). But it was not long before she was placed under house arrest. From there, she would witness her party’s victory in the 1990 election, a result the junta refused to accept.

To her residence, a villa by the lake in Yangon, Suu Kyi was allowed visits by the rare envoy, and from time to time, her two sons, who had remained in Britain and lived with her father. Suu Kyi lost her husband to cancer in 1999; she could not visit him until he died.

In 1990, Suu Kyi won the European Parliament’s Sakharov Prize for Freedom of Thought, Europe’s highest homage to human rights, one year before the Nobel Committee awarded its prestigious Peace Prize. The catalog of awards that Suu Kyi received extended around the world: US Presidential Medal for Freedom in 2000, honorary citizenship of the city of Paris in 2004, Olof Palme Prize for Human Rights in 2005, honorary Canadian citizenship in 2007, Catalonia International Prize in 2008, French Honorary Legion in 2012 and the US Holocaust Memorial Museum’s Elie Wiesel Award the same year.

“Aung San Suu Kyi was put on a pedestal during her 15 years of house arrest and promoted to star status. She was a woman, she was beautiful, she fought against a military junta. You could not imagine a better representative of democracy,” David Camroux, a historian specializing in Southeast Asia and lecturer at the French Sciences Po, told FRANCE 24.

To fully understand the praise Suu Kyi enjoys, one only needs to remember November 13, 2010, the day she was finally released from detention. The news was immediately celebrated all over the West. In Paris, a gathering was quickly organized in the courtyard of City Hall by Suu Kyi’s French support committee. When Mayor Bertrand Delanoë participated along with actress-musician Jane Birkin, the group’s spokesman and Oscar-winning film star Marion Cotillard.

In 2012, Suu Kyi questioned the by-elections in which her party won 43 of the 44 parliamentary seats in which it ran. She took her place as a legislator in Myanmar’s parliament in May. But the real breakthrough came in 2015, when the NLD won the landslide election.

Myanmar’s journey back to military rule

Although the constitution forbade Suu Kyi to seek the presidency because of her marriage to a foreigner – a provision the military had introduced to prevent her from office – one of her party associates, Htin Kyaw, was elected to the role of 2016. Suu Kyi, who assumed defective leadership in the country.

During his years in Myanmar’s rule, Suu Kyi was tested by the austerity of power, forced to cope with the almighty military officials who remained on top of important government ministries.

Inaction over the Rohingya tragedy

Suu Kyi achieved domestic success as the economy grew and Myanmar attracted foreign investment, especially from China and Japan. But her image was forever damaged internationally by the tragedy of the Rohingya Muslims.

In 2017, about 750,000 members of the Rohingya minority were forced to flee violent abuses by the army and Buddhist militias and took refuge in makeshift camps across the border in Bangladesh. In the tragedy, Myanmar was accused of “genocide” before the International Court of Justice, the UN’s main judicial body.

In 2019, Suu Kyi personally led the country’s defense in the Hague tribunal, dismissing the allegations of genocide as “incomplete and misleading”, although she admitted war crimes may have been committed. Her apparent lack of compassion for Rohingya upset the international community. But “Mother Suu,” as the Burmese call her, kept the confidence of her people at home.

“The disappointment was great because the expectations were unrealistic,” Camroux told FRANCE 24. “Aung San Suu Kyi believes that the ethnic majority she hails from, Bamar, is superior and that they are the real Burmese, that is where she disregards “Rohingya came from. There was also a political calculation on her part because she had to reconcile with the military officials and exhibit her patriotism.”

In addition to the Rohingya situation, international observers have blamed Suu Kyi for what she sees as her autocratic attitude to power.

“She’s a pretty authoritarian woman who does not delegate,” Camroux said. “It’s actually a real problem within her party because we do not see a new generation appear. Many of the people who run the party are about 80 years old. It is difficult to see who can succeed her.”

Still, Suu Kyi is still very popular in Myanmar. Considered a model for modesty and austerity, she embodies for many Burmese what a true Buddhist should be. In fact, team selection in November confirmed her popularity, with Suu Kyi’s NLD winning an overwhelming victory.