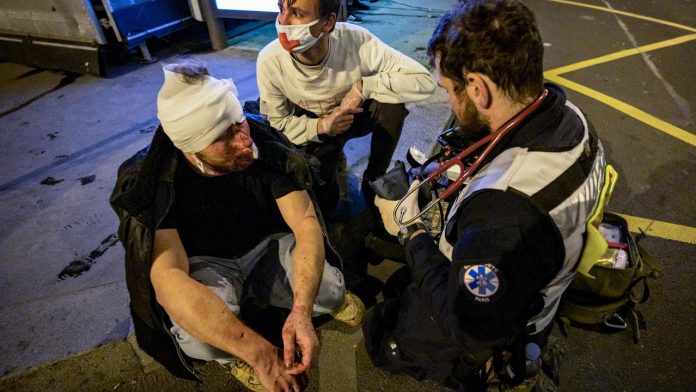 A press freedom group has condemned the “unacceptable” injury of an award-winning Syrian photojournalist during a protest in Paris against police brutality.

Ameer Alhalbi, a freelance photographer who worked for Polka Magazine and AFP, covered the demonstrations over the weekend against police violence and the French government’s new law restricting the sharing of images of officers.

In AFP images, Alhalbi’s face appears bruised with much of his head covered with bandages.

Christophe Deloire, secretary general of Reporters Without Borders, tweeted that the 24-year-old had been injured in Place de la Bastille by “a police bar” and condemned the violence.

“Ameer came from #Syria to #France to take refuge, as did several other Syrian journalists. The country for human rights should not threaten them, but protect them,” he said in a second tweet.

Deloire also noted that Alhalbi had been clearly identified as a journalist.

Dimitri Beck, director of photography for Polka, said that Alhalbi had a broken nose and a damaged forehead and was taken to hospital.

Alhalbi has won several international awards, including second prize in the “Spot News” category for World Press Photo 2017, mainly for its coverage of the Syrian conflict in its hometown of Aleppo for AFP.

Police said on Sunday that two protesters had complained of being injured by officers in protests outside Paris, while yet no bill had been in the capital.

About 62 police officers were injured during the demonstrations on Saturdays, the Interior Ministry said, while 81 people were arrested.