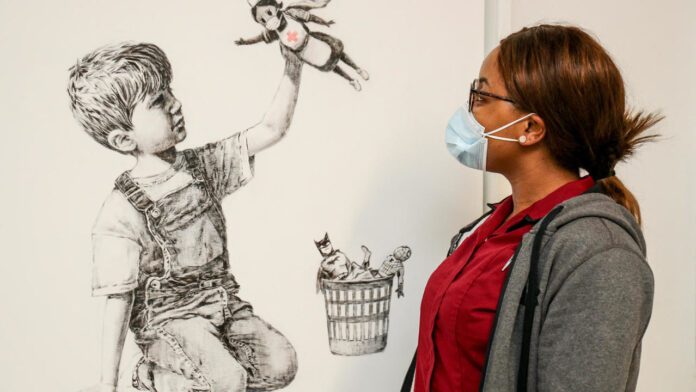 The “Game Changer” painting sold for £ 14.4 million plus costs – the highest ever for a Banksy painting – after fierce competition between bidders in a nail-biting sale at Christie’s auction house in London.

The signed oil painting by the elusive artist shows a boy holding a nurse’s doll up while the Batman and Superman figures are sent to a dustbin.

It first appeared at Southampton General Hospital on the south coast of England during the first wave of the global coronavirus crisis in May last year.

The artist – who first emerged from Bristol’s graffiti scene in south-west England in the 1990s – left a note with the painting and thanked hospital staff for their work fighting the pandemic.

“Thank you for everything you do. I hope this lights up the place a bit, even if it’s just in black and white,” he wrote.

Proceeds from the auction go to NHS charities and a reproduction of the play continues to hang at Southampton Hospital.

The auctioneer praised Banksy’s “incredible gesture” when he donated the work.

“It’s a Game Changer in every sense,” he said of the painting.

Masked middlemen talking on cell phones forwarded bids from around the world during nail-biter sales.

The previous record auction price for a Banksy work in October 2019 was almost £ 9.9 million at Sotheby’s auction house for “Devolved Parliament”, a painting showing the parliament populated by chimpanzees.

‘Symbol of its time’

Christie’s said in a statement that the painting was a departure from Banksy’s usual disrespectful style and instead “a personal tribute to those who continue to turn the tide of the pandemic”.

“As a work of art, however, it will forever remain a symbol of its time: a reminder of the world’s real game changers and the important work they do,” said the international art dealer.

However, the painting may also have a political subtitle, as it was donated shortly after Prime Minister Boris Johnson said the public antibody tests could be a “game changer” in the pandemic – just for experts to quickly pour cold water on the idea.

Steph Gurney, a senior nurse at the hospital’s emergency medical unit, said the appearance of the painting came as a “real shock and a surprise” and that it “meant so much that a world-famous artist would like to donate work to our hospital”.

Banksy has continued to create other works during the pandemic. In July 2020, disguised as a cleaner, he spray-painted a series of rats that encouraged people to wear face masks on London’s underground transport system.

In December, he pulled a woman who was sneezing on the side of a house in Bristol.