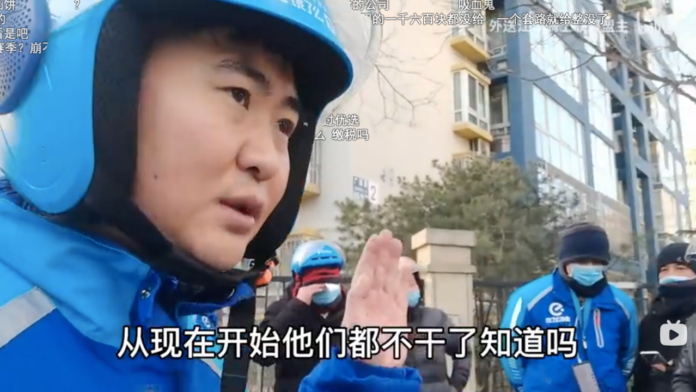 On February 25, Xiong Yan, a well-known supplier and labor activist in Beijing, known online as the “Leader of the Delivery Knights Alliance”, was arrested by the authorities after posting online videos condemning labor violations by China’s top food delivery apps. In early March, riders for the Meituan delivery app went on strike in the city of Shenzhen, protesting against wage cuts in an industry criticized for imposing dangerous productivity standards on riders while paying for them.

Xiong Yan, a rider with the popular food delivery platform Ele.me, has worked in the industry with China’s 3 million delivery riders since 2018. But online, he is the face and leader of the online delivery group “Delivery Knights Alliance”, an unofficial union that supports drivers and creates online videos that reveal the industry’s unscrupulous working methods. The group was founded by another leader in 2019 and counts more than 10,000 riders in its several WeChat groups.

A January 10 Douyin video of Xiong Yan condemns the accident insurance payment for Han Yewei, a delivery rider with Ele.me who died suddenly during a ride in December last year.

On January 10, Xiong published this video on Douyin (China’s version of TikTok) about Han Yewei, a 43-year-old delivery rider who fell and died suddenly during a ride in December last year. When he examined Eleme’s insurance, his widow found that her deceased husband was charged 3 yuan (€ 0.39) per day for what he assumed was an accident insurance premium. In fact, only 1 of the 3 yuan went against accident insurance, so the family was only entitled to 30,000 yuan (€ 3,874) in insurance payments. But after Internet users condemned the platform on social media, Ele.me revised its policy and increased the payment for death insurance to 600,000 yuan (€ 77,444).

On February 17, about a week before his arrest, Xiong released another video condemning Ele.me’s misleading New Year’s holiday bonus for its drivers. In the video, which was shown at 553,000 on the Chinese video platform Bilibili, he interviews a group of Beijing riders who chose not to go home to the spring festival because of the platform’s holiday bonus program, which promised them rewards of about 8,000 yuan (1,033 euros)) if they meet certain delivery quotas.

But riders complained that the quotas soon increased to impossible levels, with a volume of 380 orders per week, which would be equivalent to working more than 18 hours a day. According to these impossible rules, riders would not be able to get the holiday bonus for which they had given up the New Year’s party.

After network users reported the platform in yet another social media uprising, Ele.me published an apology on its Weibo account on February 19, stating that it would compensate for “quota deviations” by adding more opportunities for riders to be rewarded. It also made it clear that riders would still be awarded bonuses even if they did not meet all the quotas.

However, the statement was met with cynicism and anger from Chinese network users, who called the company “blood-sucking capitalists”.

On February 25, Xiong and several of his close friends were arrested in Beijing for unknown reasons, Radio Free Asia reported and has not been heard from since. According to his comrades, his outspoken activism and condemnation of food giants may have worried the authorities.

On March 1, a video on the Chinese microblogging platform Weibo shows a group of Meituan delivery riders in Shenzhen, Guangdong hitting a mall due to a change in the application’s payment policy that would replace riders depending on the distance of a delivery, thereby reducing their income.

Around the same time, network users also noticed a significant delay in delivery from food ordering apps such as Meituan and Ele.me in Beijing, leading to speculation that riders in the capital were also hitting. But both companies refuted rumors and cited problems with equestrian capacity and other administrative issues.

China’s expansive e-commerce and food delivery, built on the backs of the country’s three million delivery riders, has been attacked in recent years during the long working hours, the enormous pressure and the dangerous conditions that the riders have to endure.

A 2020 report, published in Rénwù, an influential government magazine that tells stories of human interest, says the profession has become one of the most high-risk jobs in today’s China, with intense competition between food delivery apps forcing riders to compete against the clock and algorithms that penalize them for not completing orders within the allotted time.

On January 11, a delivery rider in Taizhou set himself on fire due to unpaid wages.