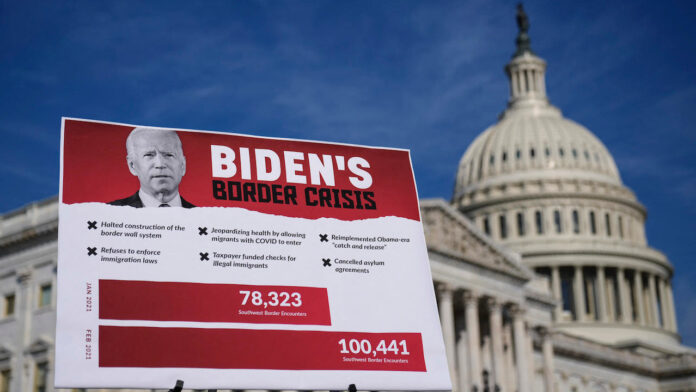 After two months of relatively steady sailing, Joe Biden has landed in choppy water: in the face of a migrating rush on the border with Mexico, the Democratic president is accused of not responding effectively – and of lack of transparency with the media.

Biden has been questioned by Republican opponents, but also by some in his own party, and has embarked on a difficult week which on Thursday shows its first press conference since taking office.

The influx of thousands of migrants has opened the door to his critics, who struggled to find an angle when Biden successfully stepped up the coronavirus vaccination campaign – and it has united the broken Republican Party in the process.

They have accused the new president of creating border chaos with a naive immigration position.

“Despite your administration’s refusal to acknowledge that this is a crisis, the American people are beginning to understand the seriousness of the situation,” said Republican Senator Ted Cruz, announcing that he would visit the border this week with 14 of his colleagues.

Cruz accused the White House of “hiding the truth” by preventing journalists from visiting border crossings, especially those holding children.

Biden’s predecessor Donald Trump chimed in and said: “It’s insane and it’s nothing compared to what it’s going to be in the coming months,” the flames fan about a topic that has long been a trigger for his political base.

So far, Biden has largely avoided the issue, but facing journalists’ questions at his press conference later this week, he knows he will need to address it.

Asked about it on Sunday night after a weekend at Camp David, he remained evasive.

Does he intend to go to the border himself?

Does he not feel the need to see for himself what is happening there?

“I know what’s going on in these facilities,” he replied.

His last ten tweets discuss masks, vaccinations, St. Patrick’s Day, the stimulus package, global warming and violence against Asian Americans … but not the situation at the border.

‘The border is not open’

The crisis is hampering the White House’s plans to continue the “Help is Here” tour – a victory round that promotes the benefits of Biden’s gigantic, massively popular $ 1.9 trillion economic stimulus plan adopted by Congress.

This week’s only presidential trip is scheduled for Tuesday – Biden travels to Ohio to highlight the positive impact of his aid initiative, called the “American Rescue Plan,” on the health care sector.

At a time when legislators from both parties are visiting the border and the first images of unaccompanied migrant children, which is at the heart of the controversy, are being released – the White House is struggling to explain how it ended up here and what comes next.

Biden has promised to erase what he called “a moral and national shame” inherited from Trump – namely the separation between thousands of migrant families, some of whom have not yet been reunited.

But while children are no longer separated from their parents at the border, the arrival of a large number of unaccompanied minors is an urgent issue.

“The border is not open. The majority of people are rejected, says White House Press Minister Jen Psaki on Monday.

“With children, we focus on speeding up treatment at the border and making sure they can get protection as quickly as possible.”

Homeland Security Secretary Alejandro Mayorkas, under fire for his sometimes confusing messages, did not deny the number of 5,200 children held in adult centers at the border – well above the top under Trump.

More than 600 of them have also been there for more than ten days, although the law only allows them to transit for a maximum of three days.

Senator Chris Murphy, a Democrat, said he saw hundreds of children packed into a “large, open room” and “shed tears” as he listened to a 13-year-old girl upset after being separated from her grandmother.

In The Washington Post, photographer John Moore, author of a book at the border, said Trump’s “zero tolerance” for immigrants had turned into the Biden-era “zero access” for journalists.

“The current administration has taken over with a promise to make US immigration policy more humane and transparent. But there is no end to the latter case, which makes it difficult to assess how the former is doing, he said.