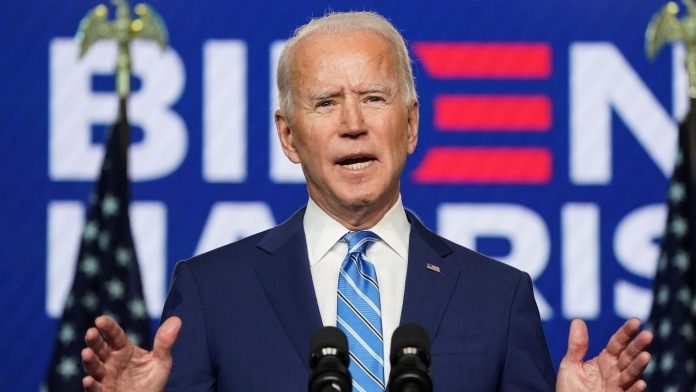 While the US election is still in the offing, a victory by Democrat Joe Biden comes with the promise that the United States will be reunited with the climate agreement in Paris, which he has promised to do on his first day in office.

But doing so risks widening the gap not only between disgruntled Donald Trump voters who want to protect traditional oil and gas jobs but from progressives within their own party running a New Green business.

As the vote continued after one of the most controversial US presidential elections, the United States became the first country to withdraw from the UN’s international climate pledge, known as the Paris Agreement.

Joe Biden criticized the move and promised to prioritize the climate.

“Today, the Trump administration officially left the Paris climate agreement. And in exactly 77 days, a Biden administration will be reunited with it,” tweeted Biden, who would take the president’s oath on January 20.

Today, the Trump administration officially left the Paris Agreement. And in exactly 77 days, a Biden administration will rejoin it. https://t.co/L8UJimS6v2

If he wins the presidential race, Biden could sign a decree to return to the pact and add the United States to 187 other countries that have already signed the agreement. No matter what the choice, it can make or break international climate change policy, especially since the United States is the world’s second largest greenhouse gas emitter behind China.

Biden, for its part, has also proposed a $ 1.7 trillion plan focused on clean energy, green jobs and a goal of carbon-free electricity by 2035 and net zero emissions by 2050. The plan shifts the country’s course away from the Trump path, which has strongly supported the fossil fuel industry, gave more oxygen to theories advocated by climate change deniers and reduced environmental protection.

Signing the Paris Pact can also help steer the global conversation on climate change and resume the United States’ role as a global leader.

May Boeve, CEO of the California-based global environmental advocacy group 350.org, said in an interview with USA Today that a lack of long-term US climate leadership jeopardizes other areas of global cooperation, such as trade and human rights.

“Whatever the end result of the election, do not figure out the United States,” she said. “There are millions of Americans who reject this regression, are committed to climate justice and demand that the United States … maintain goals for Paris and go beyond.”

But getting there will have its challenges.

Not only will the United States need to restore its international position on climate change, but possibly even more challenging for Biden will wrestle with deviant progressives and climate change activists who want to do more and faster.

Progressives on the left were less than captivated by Biden’s stance on the climate and preferred to support Vermont Senator Bernie Sanders. Youth-led climate change activist Sunrise Movement – backed by the Green New Deal and backed by Congressman Alexandria Ocasio-Cortez and other Democrats – gave Biden F ratings for his climate plan, saying they would hold him accountable by running a “multi-campaign” for to prioritize climate change.

Pretty cool that @ JoeBiden’s safest statement so far about being the next president of the United States is about Day 1 action to address the climate crisis.

Biden has a climate mandate, and our movement will ensure that he acts on it.

The credibility gap at home

The avant-garde of Green New Deal advocates is led by a generation of first-time voters, such as the Sunrise movement, who intend to push for more radical reforms. They want a rapid decarburization and a ban on oil and gas production.

They have criticized former Vice President Biden for a lack of political details for tackling climate change.

From within the party’s center, where Biden gathered his support, Democrats have trampled on a sensitive path and tried to calm both voices calling for an immediate expansion of reforms while being careful not to raise concerns about jobs by advocating shifts that could disrupt the country’s oil. . and the gas industry.

In one of the televised debates with Trump, the former vice president said he was in favor of a “transition” away from the oil industry in favor of renewable energy, but later clarified his statement by saying he would stop government funds from flowing to the oil industry .

Biden will no doubt need to engage in a massive economic stimulus and create jobs in renewable industries. However, he may be caught by a Congress that does not want to support major reforms that could affect the oil and gas industry at a time when the economy is already suffering from the Covid-19 pandemic.

The United States has become the world’s largest oil and gas producer and the industry reportedly has up to 10 million Americans.

Dean Baker, of Washington, DC-based Center for Economic and Policy Research, said in an interview with Jowharthat he believed Biden, and not Trump, had a clearer path to economic recovery.

“Having a Green New Deal and promoting clean energy … would meet the real needs of large sections of the population and provide a clear path to recovery.”

During his presidency, Trump fanned the flames of economic rivalry in a roaring trade war focused on accusations by the president that China “exploited” the United States for trade and blamed China for removing manufacturing and technology jobs from Americans.

It is a story that continued to resonate with Americans who were worried about job losses and were reflected in the voting trends during this election. Many of the country’s economically marginalized and traditional working – class voters failed to support Biden in sufficient numbers to achieve the knowledgeable who called the ‘blue wave’ a democratic sweep.

But that fear of job losses caused by a transition to greener energies was a story that went against the economic reality under Trump. Despite the president’s efforts to revive the coal industry, more capacity was reduced during his presidency than during former President Barack Obama’s second term, while renewable energy hit record highs in production and consumption in 2019.

Biden has not yet revealed the details of what a climate change policy that includes a transition to renewable energy would look like. He supports natural gas, driven by hydraulic fracturing or “fracking”, which accounts for 35 percent of US energy production, despite strong opposition from climate change activists. Biden has defended his support for the fuel as a “bridge” to renewable energy sources and said he would not ban fracking.

According to Baker, the United States has seen “an explosion of fracking in large parts of the country, at least in Pennsylvania,” adding that “for better or worse” was also the policy of the Obama administration.

“They also supported fracking. The difference is that Biden and Obama wanted some regulation of this, while Trump has said “Do what you want”, Baker told FRANCE 24.

But when it’s time to cross the bridge from fracking, Biden must build trust in other international allies, including China. The United States is dependent on China for minerals, some of which are necessary for renewable energy sources such as solar energy and wind power.

“We can not just push them (China) around,” Baker said. “We need to find out if you want serious relations with China, which are the most important issues that we should be upset about and we need to make concessions. I’ve seen zero evidence of what Trump wants to do other than fight. And we can not do that with China, he said.

If the United States signs the Paris Pact again, it will have to catch up with other nations that have already promised and started reducing emissions and moving towards carbon neutrality.

South Korea and Japan, Britain and the EU are all part of a “growing coalition of nations committed to achieving carbon neutrality by 2050,” said UN spokesman Stephane Dujarric, pointing to signs of progress in an interview with AFP.

China has also announced that it will set its own targets for zero-zero.

In an interview with the New York Times, Todd Stern, who served as an envoy for climate change under Obama, said the United States would first need to prioritize climate change action on the domestic side. “We have to show that this is really a very high priority and that the new president is moving forward.”

No matter what his administration may do for global environmental cooperation, Biden will face a tough fight to push through climate reforms at home. Republicans are likely to retain control of the Senate – and with that, action on climate change is still in their hands.