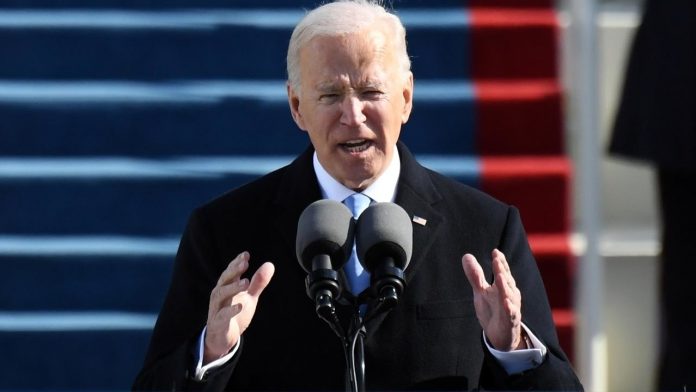 Democrat Joe Biden swore in as US president on Wednesday, pledging to end the “civil war” in a deeply divided country that flowed from a battered economy and a raging coronavirus pandemic that has killed more than 400,000 Americans.

With his hand on a five-inch-thick heirloom bible that has been in his family for more than a century, Biden removed the oath administered by U.S. Supreme Court Justice John Roberts that binds the president to “preserve, protect and defend the United States Constitution.”

“Through a crucible for the times, America has been retested, and America has taken up the challenge,” Biden said in his introductory speech. “Today we do not celebrate the triumph of a candidate but one thing: the cause of democracy … At this hour, my friends, democracy has won.”

Biden, 78, became the oldest U.S. president in history at a scaled-down ceremony in Washington that largely abolished its usual pomp and circumstance, due to both coronavirus and security concerns following the January 6 attack on the US capital by supporters of former President Donald Trump.

The norm-challenging Trump was talking about one last congress on his way out of the White House when he refused to meet with Biden or attend the inauguration of his successor and break with a political tradition that is considered to confirm the peaceful transfer of power.

Trump, who never conceded the November 3 election, did not name Biden in his final remarks as president on Wednesday morning, when he broke his government’s record and promised to be back “in some form”. He boarded Air Force One for the last time and went to his Mar-a-Lago retreat in Florida.

Top Republicans, including Vice President Mike Pence and the party’s congressional leader, attended the inauguration of Biden, along with former US Presidents Barack Obama, George W. Bush and Bill Clinton.

The village’s running mate, Kamala Harris, daughter of immigrants from Jamaica and India, became the first black person, the first woman and the first Asian American to serve as vice president after being sworn in by US Supreme Court Justice Sonia Sotomayor, the court’s first Latina member.

The ceremony takes place at the heavily fortified American capital

Biden is entering a time of deep national unrest, with the country facing what his advisers have described as four complex crises: the pandemic, the economic city center, climate change and racial inequality. He has promised immediate action, including a series of executive orders on the first day of his term.

After a bitter campaign marked by Trump’s baseless accusations of electoral fraud, Biden struck a conciliatory tone, urging Americans who did not vote for him to give him a chance to be their president as well.

“Overcoming these challenges to restore the soul and secure America’s future requires so much more than words. It requires the most elusive of all things in a democracy: unity,” he said. “We must end this civil war that puts red against blue, rural versus urban, conservative versus liberal. We can do this – if we open our souls instead of hardening our hearts.”

The ceremony on Wednesday took place in front of a heavily fortified American capital, where a crowd of Trump supporters stormed the building two weeks ago, outraged by his false claims that the election was stolen with millions of fraudulent votes.

The violence prompted the Democratic-controlled House of Representatives to accuse Trump last week of an unprecedented second time.

Thousands of National Guard troops were called into the city after the siege, which left five people dead and briefly forced lawmakers to hide. Instead of a lot of supporters, the National Mall was covered on Wednesday by almost 200,000 flags and 56 light pillars that would represent people from US states and territories.

“Here we stand, just a few days after an outrageous crowd thought they could use force to silence the will of the people, to stop the work of our democracy, to drive us from this holy ground,” Biden said. “It did not happen; it will never happen. Not today, not tomorrow, not ever.”