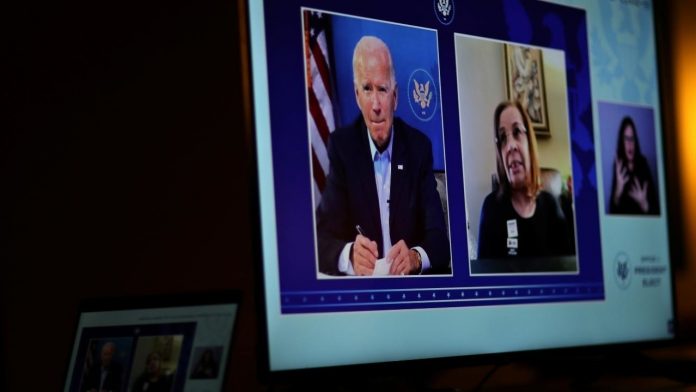 President-elect Joe Biden on Wednesday promised a group of workers affected by the raging Covid-19 pandemic that more aid would be on the way, while President Donald Trump indicated he might be ready to start planning a new run for the White House in 2024.

Biden, who has vowed to act quickly to provide more resources to combat the health crisis since its inauguration on January 20, told a group of workers and entrepreneurs that any emergency aid approved by Congress before taking office would be a “down payment.”

Republicans and Democrats are trying to resolve a month-long time in Congress over a stimulus package for companies affected by coronavirus suspensions and the millions who have lost their jobs.

“My transition team is already working on what I will present to the next Congress to address the several crises we are facing, especially the economic crisis and Covid,” Biden told workers at a roundtable in his native Delaware.

“I do not want you to give up hope,” Biden told the workers.

“Wait, we’ll get through this.”

“See you in four years”

Trump has refused to concede the November 3 election and his lawyers continue to present legal challenges to the outcome, alleging electoral fraud without providing evidence. State and federal electoral authorities have repeatedly said that there is no such evidence. Most of the trials have been rejected by judges.

At a White House reception on Tuesday night, Trump seemed to admit that these efforts could fail and in that case he would run again.

“We are trying to do another four years,” he told the group, according to a Republican source at the event. “Otherwise, we’ll see each other in four years.”

A source familiar with the internal debate says that Trump has discussed with advisers who did not attend the inauguration ceremony on January 20 but instead announced his 2024 bid that day. The source said no decision had been made. Only a handful of outgoing US presidents have chosen to miss the resignation of their successors.

Trump tweeted a video on Wednesday in which he reiterated unfounded accusations that the election was wrong and said he would continue the fight against the result. Trump, speaking behind a lectern with the president’s seal, posted a two-minute version of the message on Twitter with a link to a 46-minute version on Facebook.

A day earlier, Attorney General William Barr, who has long been perceived as a Trump ally, said the Department of Justice had not found any evidence of widespread fraud.

Trump’s claims have gained traction among his supporters, but have helped raise as much as $ 170 million for an “Election Defense Fund” that could be used for a wide range of future political activities, including another presidential candidate, according to media reports .

On Wednesday, Georgia’s Secretary of State Brad Raffensperger said Biden was on track for victory after the state’s second calculation and criticized Trump for promoting false claims.

“Even after this office requested that President Trump try to quell the violent rhetoric born of his continued claims of winning the states where he apparently lost, he tweeted out ‘exposing the massive voter fraud in Georgia,'” said Raffensperger, a Republican.

“This is exactly the kind of language that underlies a growing threat environment for election workers who are simply doing their jobs.”

Biden has already selected many of its top national security and economic advisers, although it is unclear how many will win confirmation in a close-knit Senate, whose control will be determined by a couple of run-off elections in January in Georgia.

Biden told the New York Times in an interview on Tuesday night that he would try to help resolve the suspension in Congress because of coronavirus assistance.

“You have over 10 million people out there who are worried (how) they can pay their next mortgage,” Biden said in the interview, and “you have a significantly higher number of people who have no way to pay their rent.”

Failure to do so could have political consequences for Republicans, Biden told the newspaper.

“When you have police and firefighters and first responders across the board who are laid off, when you do not get that kind of distribution of vaccines to rural America, it must have some consequences,” he was quoted as saying.

The UK approved Pfizer Inc’s Covid-19 vaccine on Wednesday, the first country to do so. Once a similar approval has been granted by U.S. regulators, health officials plan to begin vaccinating Americans as soon as mid-December.