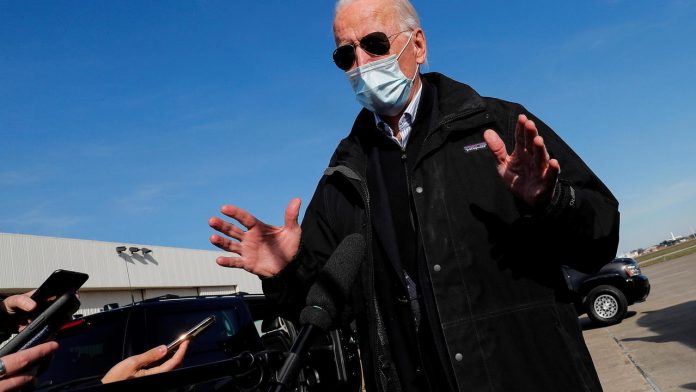 US President-elect Joe Biden said on Tuesday that he will receive a Covid-19 vaccination in a public environment and that the main infectious expert, Dr. Anthony Fauci, has recommended that it be “sooner rather than later”.

“I want to make sure we do it by the numbers and when I do, you will notice it and we will do it in public,” Biden told reporters before leaving for Georgia to fight for two Democratic Senate candidates.

“Dr. Fauci recommends that I get the vaccine sooner rather than later,” said the 78-year-old Biden.

President Donald Trump will “absolutely” encourage Americans to take Covid-19 vaccines and will receive one as soon as his medical team decides it is best, McEnany said at a white briefing on Tuesday.

But the president also wanted to show that vulnerable Americans are the top priority for receiving the vaccines, she told reporters.

McEnany said some career medical security personnel would have access to vaccines to ensure continuity in government, along with a “very small group” of senior officials in order to instill public confidence.

More than 300,000 people have died from Covid-19 in the United States and a winter rise continues over large parts of the country.

The country started a mass vaccination on Monday and the authorities hope to be able to vaccinate 20 million people this month, with health care workers and long-term care residents in front of the line.

The authorities want to reach the rest of the population in the summer, but much depends on the vaccine’s confidence. Experts estimate that more than 70 percent of people will need to take vaccines to stop the outbreak.

On Tuesday, the United States approved its first rapid home test for the virus, which is available over the counter and gives a result of about 20 minutes.

The test, conducted by Ellume in California, will sell for about $ 30 and the company plans to roll out 3 million units in January 2021 and millions more in the following months.

“We are helping to expand Americans’ access to testing, reduce the burden on laboratories and test supplies, and provide Americans with more testing options from the comfort and safety of their own homes,” he said.

The Ellume test is an “antigen” test, which means that it works by detecting a surface molecule in the coronavirus, unlike the most common PCR tests that look for the genetic material of the virus.

The test uses a nasal stick that does not go back as far as the nasopharyngeal sticks used in clinical settings. The technique involved is similar to a home pregnancy test.

The FDA said that for patients without symptoms, “positive results should be treated as probably positive until confirmed by another test as soon as possible.”

The home test connects to an app on the user’s smartphone to interpret the results. The results take as little as 20 minutes and are delivered via the app, which requires users to enter their postcode and date of birth to report to the public health authorities.

Ellume developed the test with $ 30 million (25 million euros) in government funding from the National Institutes of Health.