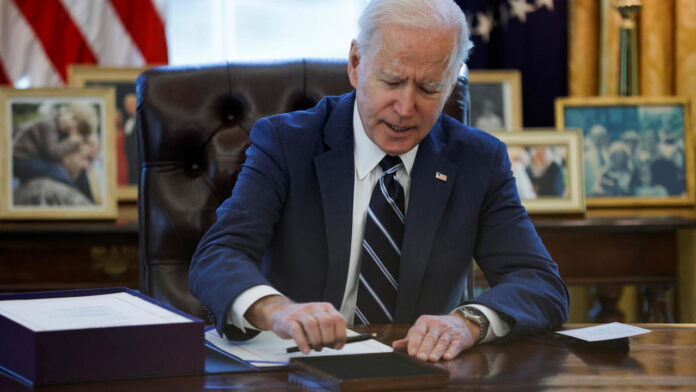 US President Joe Biden signed his $ 1.9 trillion bill into law on Thursday, saying the landmark package will bring relief to ordinary Americans and boost the economy.

The Democratic-led U.S. House of Representatives finally gave congressional approval to the measure on Wednesday, giving the Democratic president a major victory during the first months of his term.

“This historic piece of legislation is about rebuilding the backbone of this country,” Biden said before signing.

Biden signed the measure before a prime-time speech that he plans later on Thursday.

His signing of the legislation, called the American Rescue Plan, was originally planned for Friday, but White House Chief of Staff Ron Klain said it was moved up after it arrived at the White House on Wednesday night.

“We want to go as fast as possible,” Klain wrote on Twitter. A party with congressional leaders would still take place on Friday, he said.

The package provides $ 400 billion for $ 1,400 direct payments to most Americans, $ 350 billion in support of state and local governments, an expansion of the tax credit for children and increased funding for Covid-19 vaccine distribution.

One of the largest spending bills in US history

Biden, who fought for a promise to curb the pandemic more effectively than his Republican predecessor Donald Trump, has told Americans since his inauguration in January that more deaths and pain came from Covid-19.

With the vaccinated population slowly increasing, Biden conveys new hope even though he urges people to remain careful to prevent further bloating.

Biden and top assistants are planning a nationwide tour to take advantage of the pandemic relief bill, including Pennsylvania next Tuesday and Atlanta on March 19.

About 530,000 people have died from Covid-19 in the United States, and about 10 percent of Americans have been completely vaccinated.

The president is expected to warn Americans who, like people around the world, are tired of pandemic restrictions, not to return to normal behavior prematurely. Biden has called for continued mask wear, social distancing and good hygiene, and he has discouraged cities and states from loosening their guidelines for large gatherings even if more places reduce the restrictions.

Trump played down the crisis in his early stages and avoided wearing the mask, while he repeatedly predicted that the virus would soon disappear even when his administration pressed to accelerate vaccine development.

The former president and his wife Melania Trump did not appear in a public service release released on Thursday, encouraging Covid-19 vaccinations and presenting all other living former US presidents and their spouses.