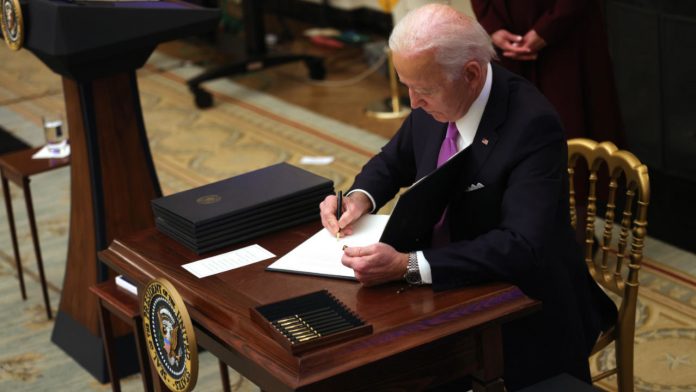 Travelers to the United States will be forced to quarantine on arrival while masks will be mandated on many domestic trains, planes and buses, President Joe Biden said Thursday as he signed a series of new executive orders to curb the Covid pandemic.

The new leader of the world’s hardest hit country has made fighting the coronavirus one of his top priorities and describes the endeavor as a “time of war” when he spoke to reporters from the Oval Office.

More than 408,000 people have died from the disease in the United States, which is more than the total military deaths the country experienced during World War II.

“In addition to wearing masks, everyone who flies to the United States from another country must test before boarding that plane before departure, and quarantine when they arrive in America,” he said.

The test requirement was announced by the previous administration of Donald Trump, but quarantine was only a recommendation.

It comes as alarming, more contagious new variants of the virus have emerged around the world. A special mutation from South Africa has raised concerns about the vaccine’s effectiveness.

Biden added that he signed a new order “to increase the masking requirements on interstate travel, such as on trains, planes and buses.”

The measures are part of Biden’s national strategy, which is described in a 200-page document that stipulates that vaccinations must be increased, tested, students returned to school and rebuilding public confidence among other goals.

The president is also seeking $ 1.9 trillion from Congress for a Covid aid package.

The administration plans to invoke emergency legislation known as the Defense Production Act to increase industrial production of vaccines and other medical supplies while setting up thousands of federal test sites.

Biden said he expected a federal pharmacy vaccination program to begin “on February 7 or 8.”

As of Wednesday, 35.9 million doses of Pfizer and Moderna shots had been distributed to states, while 16.5 million had reached weapons as either the first or second injection – a rate of 46 percent.

The administration will try to increase the supply at the same time as the distribution bottlenecks are reduced.

While the measures mark a clear break from the Trump administration, it was unclear how some of them, including the expanded mask mandate and quarantine measure, would be implemented.