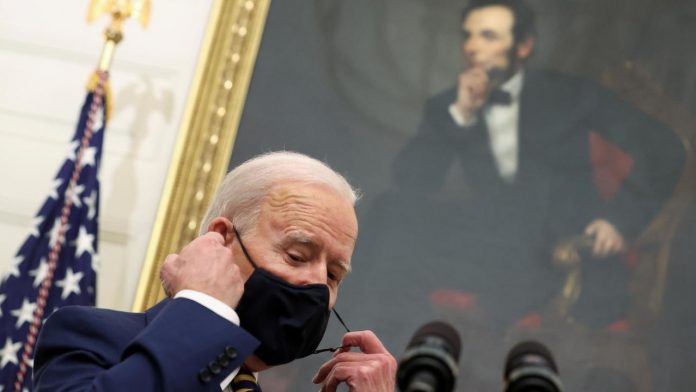 President Joe Biden warned on Friday that the death toll from coronavirus in the United States was expected to exceed 600,000 and called on Congress to move quickly on its $ 1.9 trillion plan to fight Covid-19 and provide financial relief to struggling Americans.

While Biden called for an urgent passage of his “American rescue plan,” his efforts to get Congress to cooperate on his fast-paced agenda would be complicated by Donald Trump’s looming legal process in the Senate.

Top Democrat lawmakers said on Friday that they planned to send the article on prosecution adopted by the House of Representatives to the Senate on Monday, which triggered Trump’s trial in the body.

“The virus is growing,” Biden told reporters at the White House before signing executive orders that increased food aid and accelerated stimulus payments to Americans.

“We are at 400,000 dead, expected to reach over 600,000 people. Families are starving. People are at risk of deportation. Job losses are rising again. We must act now … We must move quickly.”

Biden added that he looked forward to working with both parties in Congress to “go fast” to get people help through his rescue plan.

Biden must press Congress for funding while his government is confirmed – Pentagon chief Lloyd Austin won Senate approval on Friday – and support for legal unrest.

Trump was accused by the House on January 13 of encouraging supporters to storm Congress a week earlier.

“A trial will be held in the US Senate and there will be a vote on whether the president will be convicted,” said Democratic Senate leader Chuck Schumer.

Although Biden’s latest executive order on food aid and stimulus payments was modest, they reinforced the message that Washington must take the step towards the pandemic and related economic downturn.

The village’s $ 1.9 trillion US rescue plan provides more than $ 400 billion to address the pandemic, along with additional funding for small businesses and direct payments to Americans.

But Congress, which has already approved two huge economic bills, is reluctant. The President’s Democratic Party has only a small majority in the House and a razor advantage in the Senate.

Biden also relies on the Senate to hurry up and approve his cabinet nominations.

Brian Deese, head of the White House National Economic Council, said Republicans and Democrats in Congress must find ways to deal with the conflicting issues.

“We are currently facing a period of several crises and what we need right now is to be able to act on several fronts,” he said.

The new administration has taken a calmer style after the stormy Trump era, but Biden’s cascade of executive orders since the moment he entered the White House on Wednesday makes much of its own sound.

On the opening day, the 78-year-old Democrat signed 17 measures. He wrote 10 on Thursday and two more on Friday.

A number of orders have covered the top list on the campaign agenda, including the political hot potato for immigration reform.

Biden extended the protection against deportation for so-called “Dreamers” – children of illegal immigrants who have grown up in the country.

But the offensive is overwhelmingly focused on what Biden described on Friday as a “once-in-a-century public health crisis” and the worst “job and economic crisis in modern history.”

“And the crisis is only deepening,” he said. “It does not get better. It deepens.”

On the meeting front, a first key security figure was confirmed on Wednesday, head of National Intelligence Avril Haines. The Senate’s confirmation of Austin on Friday makes him the first African-American to lead the Pentagon.

The already congested schedule in the legislature will now have to cope with the drama of paralysis.

White House Press Minister Jen Psaki told reporters that Biden, who has been a senator for decades, is still safe.

“The Senate, members of both parties, can go and chew gum at the same time and can move forward with the activities of the American people,” she said.