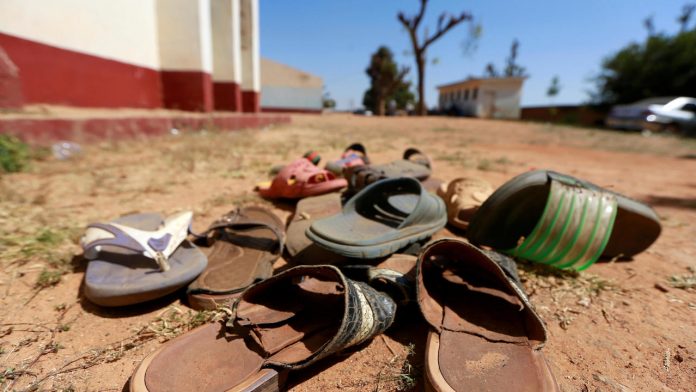 An upset teenager, who spoke English and Hausa in the video seen by AFP, said he was among 520 students taken by the “Abu Shekau gang”.

The teenager was surrounded by a large group of boys – some looking very young – who gathered under a tree and seemed cloudy and exhausted.

The attack last Friday on a rural school in Kankara, Katsina state, was originally accused of criminals, known as bandits, who have been terrorizing the region for several years.

But on Tuesday, Boko Haram claimed responsibility for the raid, which occurred hundreds of kilometers from its stronghold in northeastern Nigeria – the birthplace of a brutal decade-old uprising.

The video was released with a recording of a voice similar to the group’s elusive leader, Abubakar Shekau.

The repeated claim to responsibility.

“I used to release a sound that confirmed that our people were doing God’s work, but people denied it,” the voice said. “Here are my men, and your children have spoken.”

No government confirmation on video

The video was sent to AFP via the same channel as previous messages by Boko Haram.

Security sources told AFP on Wednesday that the operation was carried out on the orders of Boko Haram by a notorious local gangster named Awwalun Daudawa, in collaboration with Idi Minorti and Dankarami, two other crime bosses with strong local following.

The government has not immediately responded to Boko Haram’s claims, nor has it confirmed the exact number of missing children.

Two accounts of different officials have set the number of schoolboys at 320 or 333.

Shekau was behind the abduction of 276 schoolgirls in Chibok in 2014 that sparked global outrage.

#BringBackOurBoys started trending on social media, referring to a similar hashtag after the Chibok kidnappings.

Small protests to push for the boy’s release took place in Katsina as well as in the capital Abuja on Thursday.