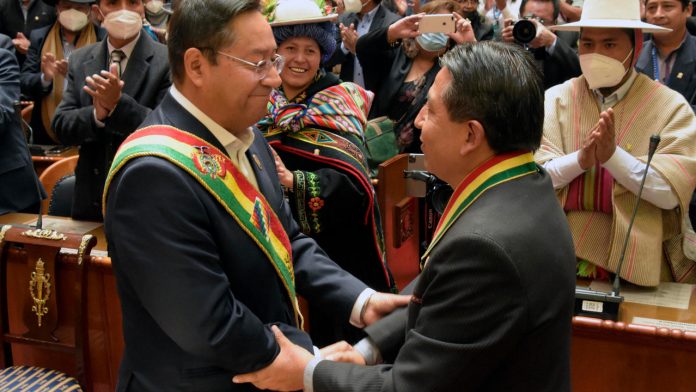 Bolivia’s Luis Arce swore in as president on Sunday, bringing the country’s powerful socialist party back to power a year after long-term left-wing leader Evo Morales was ousted during angry protests that sparked a political crisis.

Arce, 57, was inaugurated at a ceremony in the highlands of La Paz, in front of heads of state from Argentina, Paraguay, Colombia and Spain, as well as senior officials from Chile, Iran and the government of Venezuela’s Nicolas Maduro.

The unassuming and brilliant former Minister of the Economy, practiced as the architect of Bolivia’s rapid growth under Morales, comes to his office in the face of the enormous task of healing the divisions of a political crisis and the coronavirus pandemic.

“We face the great challenge of rebuilding our economy, of creating security, of creating growth,” Arce told a packed assembly of lawmakers and guests along with his vice president, David Choquehuanca.

Arce promised to “defeat” the pandemic in a country that has one of the worst death tolls per capita, and to heal political divides and “put an end to the fear” of deadly violence last year.

“I believe in justice, not in promoting an environment of resentment and revenge that does not respect the diversity of thought, where being from another party or political color makes you an object of hatred. It must end,” he said.

As Morales’ successor, Arce won a resounding victory in the first round of the October 18 election, surpassing his chief challenger, center-back Carlos Mesa, by 26 points.

But tensions have remained high, especially over Morale’s return from exile and changes made by the Socialist-led Congress to lower the majority needed to pass new laws. On Sunday, the opposition law in Congress protested against the reduced majority, which would allow the ruling party to more easily push through new bills.

Morales, who led the country for nearly 14 years as the first indigenous president, sparked a widespread backlash last year as he fought for an unparalleled fourth term in front of term limits and a national referendum.

After claiming victory in that election, Morales was eventually forced to resign amid angry protests, and the police and military eventually lost support for him. He fled the country and a Conservative interim government took over.

The former president returned on Monday from the border with Argentina, where he had sought refuge after fleeing to Mexico. He went to the central co-cultivation region of El Chapare, where he has strong support among the rural population.

Arce, who was elected by Morales and is a close ally, has said the former president will not play a role in his government. Morales is expected to return to Bolivia on Monday before continuing to his rural stronghold in Chapare.

As Minister of Economy, Arce promoted the nationalization of strategic sectors such as hydrocarbons and energy and drove domestic production with public investment and subsidies, which helped Bolivia grow to one of the fastest prices in Latin America.