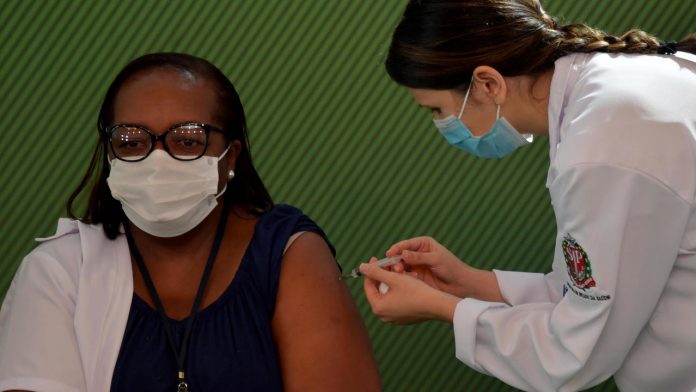 On Sunday, Brazil’s health inspectorate gave emergency approval to two coronavirus vaccines, which launched a mass vaccination campaign in the midst of a devastating second epidemic that killed more than 1,000 people daily in the great South American nation.

Monica Calazans, a 54-year-old nurse in Sao Paulo, became the first person in Brazil to receive the Chinese CoronaVac jab after the Anvisa watchdog’s long-awaited verdict.

Anvisa also approved AstraZeneca and Oxford University’s Covishield shots for use in the country whose Covid-19 death toll now exceeds 209,000 – surpassed only by the United States.

Health Minister Eduardo Pazuello announced that the government would begin distributing vaccines to all 27 states on Monday for a national vaccination campaign to begin on Wednesday.

When Anvisa met in the capital Brasilia, activists gathered outside to inflate a bigger picture than lifelong President Jair Bolsonaro, his hands dripping with metaphorical blood.

Bolsonaro, who has downplayed the virus and blasted lockdowns, face masks and other “hysteria”, has come under renewed fire for his handling of the epidemic following a new outbreak that has hit the northern Amazon state particularly hard.

While many countries have already started vaccinations, including some among their neighbors, Brazil with about 213 million inhabitants has lagged behind.

And CoronaVac has been drawn into a political suspension between Bolsonaro, who has repeatedly tried to discredit it, and Sao Paulo Sao Paulo Governor Joao Doria, a defender.

Doria attended the first ceremonial vaccination of Calazan’s Sunday at an event that also saw Vanusa Costa Santos, a member of the Kaimbe tribe, receive a jab.

Pazuello condemned the Sao Paulo incident as a “marketing game” by Bolsonaro’s rival.

Health workers, people over the age of 75, residents of old people’s homes and indigenous peoples will be the first to be vaccinated when the national campaign starts in earnest. Both vaccines require two doses.

CoronaVac is produced by China’s Sinovac company with the Butantan Institute in Sao Paulo. It has been approved for emergency use in China, Indonesia and Turkey.

AstraZeneca jab is manufactured by the Serum Institute in India, has been approved in the UK, Argentina and India and is reviewed by the European Union.

Sao Paulo already has six million doses of the CoronaVac vaccine, and the Ministry of Health announced this month that it had signed an agreement with Butantan to produce 100 million more.

Earlier this month, Brazil said the Chinese vaccine had been shown to be 50 percent effective in preventing infection with the virus.

In the case of the Oxford vaccine, the results published in December found that it was between 62% and 90% effective, depending on the dosage.

Both appear to be below the more than 90 percent efficacy reported for vaccines developed by US pharmaceutical companies Pfizer and Moderna.

Last week, Bolsonaro announced that a commercial plan would be sent to India to collect two million doses of Covishield, but New Delhi, which has just launched its own mass vaccination campaign, has not yet given the green light.

Sunday’s approval came amid a devastating second wave of the Covid-19 epidemic that has seen hospitals in the Amazon rainforest city of Manaus lose beds and life-saving oxygen.

With hospital stays reaching even higher levels than during the first wave, Manaus has once again had to distribute refrigerated trucks to store corpses as emergency oxygen supplies rushed in from outside and patients flew to hospitals in other states.

According to official figures, Manaus last Wednesday saw a fourth day in a row with record burials.

The state is also believed to be the origin of a new virus variant that was recently discovered in Japan, and which researchers warn is probably more contagious.

It is not clear if this variant is the cause of the recurrence.

A ten-day curfew from 7pm to 6am came into effect in the Amazon last Friday in an attempt to stop the rapid spread of the virus, and a court has forced the state government to close unnecessary businesses for 15 days.

Bolsonaro accuses state governors and mayors of the health and economic crisis triggered by the coronavirus and claims that the federal government has distributed all the resources needed to fight the epidemic.

His stance sparked protests in several cities on Friday.