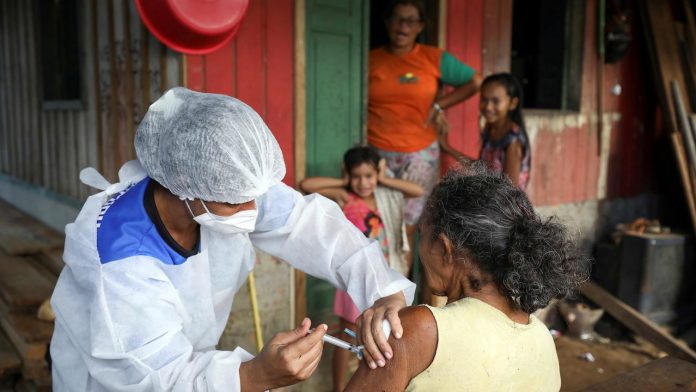 Health workers rushed along the Amazon River this week to begin vaccinating communities along the river, giving hope to a region hard hit by COVID-19 and now facing a deadly wave driven by a new Brazilian variant of the coronavirus.

Wearing protective masks and dresses, they traveled by open motorboat from Manacapuru, a city two hours from the jungle city of Manaus, where hospitals ran out of beds and oxygen last month and cemeteries could not dig graves fast enough to deal with Brazil’s highest mortality. .

“I’m glad you came. We have also lost so many old people and young people, says 83-year-old Maria Araujo after receiving a dose of a British vaccine made by the Indian Serum Institute.

“This has given us hope that things will change, they will improve,” she said.

Brazil is encrypting to gain access to more vaccines to fight the world’s deadliest coronavirus outbreak outside the United States. To date, it has vaccinated 2 million people, mostly health workers and elderly Brazilians, with vaccines from China’s Sinovac Biotech Ltd and AstraZeneca Plc.

More than 9.2 million Brazilians have been infected with the virus and 225,000 have died.

In Manaus, the capital of the Amazon state with 2.1 million inhabitants, more than 5,500 people have died, or 261 per 100,000, the highest proportion in Brazil, according to the Ministry of Health.

Carissa Etienne, head of the Pan American Health Organization, said Wednesday that the city still saw exponential increases in both cases and deaths.

Researchers say that the aggressive increase in Manaus is largely due to a new variant of the virus that was discovered there, called P1, which has quickly become the dominant variant, which leads researchers to believe that it is more contagious.

Genome sequencing indicates that 91% of new COVID-19 cases in January in the state of Amazonas involved the new variant, says Felipe Naveca, a virologist at ILMD / Fiocruz Amazônia Biomedical Research Center. This is an increase from 51% of cases followed in December and none in November.

The variant was first discovered at the beginning of last month on four travelers who arrived in Japan from the Amazon.

Researchers have not yet determined whether P1, derived from B.1.1.28 lineage of SARS-CoV-2, is more lethal than previous variants. Naveca said it was clearly spreading faster, although cases also increased due to less social distancing during the holidays.