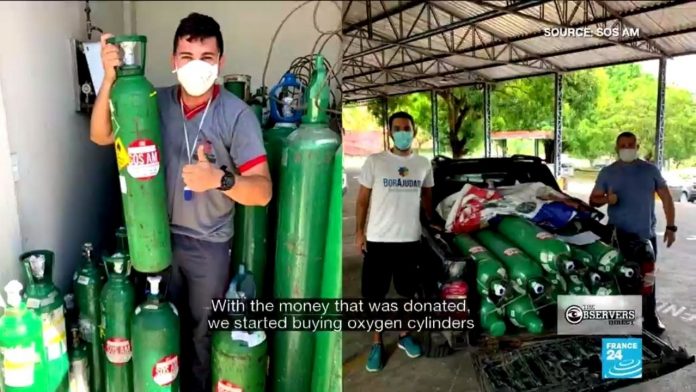 A brutal second wave of Covid-19 has swept through the city of Manaus, northwestern Brazil, since early January. The city’s overwhelmed hospital is facing an acute lack of oxygen. In mid-January, social media called out with emergency calls from medical workers and family members. In response to this health crisis, local volunteers have launched a campaign called “SOS Amazonas” to support the region’s hospitals.

“Please, if you have the means, oxygen”: On January 14, Thalita Rocha, a resident of Manaus, published a series of videos appealing for help on Instagram. She filmed the films outside a hospital. “There is no oxygen left at all in the care unit,” she says, panicking.

Rocha’s post was shared by people all over Brazil. In an interview, she said she filmed her videos in front of the hospital on Redençao while her mother-in-law was being treated for Covid-19 in the intensive care unit.

In a desperate attempt to save her, Rocha and her husband bought an oxygen tank, but it was too late.

“It was awful. I do not have the words to describe the scene – as something outside the war zone. People suffered, died because they could not breathe. Imagine. They tried to breathe air and could not do it,” she said in an interview with RFI.

Hospitals in this city in the heart of the Amazon rainforest were overwhelmed by the peak of falls in January and quickly ran out of oxygen. More and more haunting stories like Rocha began to appear online and in the media.

Terrified by the situation, several groups and associations in Manaus launched an emergency campaign called SOS Amazonas. They raised enough money to buy oxygen cans, transport them to Manaus by plane or boat, and distribute them to intensive care units.

“We have never seen such a situation,” said Gustavo Melo, one of the people who coordinated this campaign.

In our episode of The Observers, he explained:

We launched this campaign to help people by providing them with food and water. But the campaign went viral after it was shared by a certain Instagram account. This meant that we could help with the main concern – that people die due to lack of oxygen. It was an unprecedented situation. With the money donated, we could start buying oxygen cylinders and bring them in from other states in Brazil.

We negotiated with the airlines. We collect donations of oxygen tanks at the airport. We also work with volunteers and the police to distribute the cylinders in hospitals. We publish a lot of information on Instagram. We also do livestreams where we explain what we do to be completely transparent.

On February 4, the Brazilian Minister of Justice launched a preliminary investigation into the potentially fatal mismanagement of the Covid-19 crisis by President Jair Bolsonaro and his Minister of Health Eduardo Pazuello in Manaus and the neighboring state of Pará.

This measure came after a Supreme Court on January 25 approved an investigation by the Minister of Health to determine his level of responsibility for the collapse of the health system in Manaus during the second wave of the pandemic.

More than 228,000 people have died from Covid-19 in Brazil. The country has seen the world’s second highest number of deaths due to the virus and is ranked number three in number of cases.