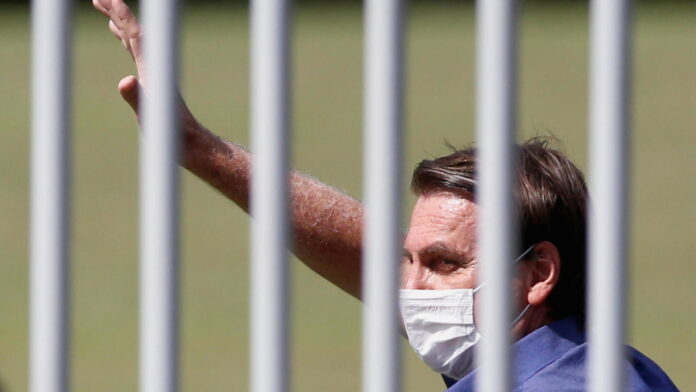 Brazilian President Jair Bolsonaro took the opportunity of his 66th birthday on Sunday to renew his attacks on Covid-19 home measures and told supporters he would fight for their “freedom”.

The right-wing leader has defied expert advice on social distancing and face masks to slow the spread of the new coronavirus – although he has recently adopted a more pragmatic tone under pressure amid a deadly wave of Covid-19 in Brazil.

It included appearing in a face mask – formerly a rarity – to greet supporters wishing him a happy birthday outside the Presidential Palace in Brasilia.

Many in the crowd, however, were maskless, and Bolsonaro used his impromptu speech to renew his attacks on home measures ordered by the president and mayor worried that their health systems were nearing collapse.

“They are picking a fight,” Bolsonaro told his supporters, some of whom gave him a cake in the green, yellow and blue of the Brazilian flag.

“If anyone thinks we should give up our freedom, they are wrong. Some tyrants out there are trying to restrict your freedom. But you can be sure, our army is olive green, and so are you all,” he said.

“You can trust that our armed forces will defend your freedom and democracy.”

Bolsonaro claims that the financial damage caused by the lock is worse than the virus itself.

But as a sign of the pressure he faces, nearly 200 economists and business leaders, including several former finance ministers and central bank presidents, issued an open letter on Sunday urging the government to speed up Brazil’s backward vaccination campaign and implement a nationally coordinated social distance policy.

“The controversy surrounding the economic impact of social distancing reflects a false dichotomy between saving lives and guaranteeing livelihoods,” they said.

“In fact, it is unrealistic to expect an economic recovery in the midst of a volatile epidemic,” they added, calling the situation in Brazil “desolate.”

The pandemic has claimed 294,000 lives in Brazil, second only to the United States.

Authorities report that intensive care units are more than 80 percent full in 25 of 27 states and almost saturated in key hotspots, including Brazil’s largest cities, Sao Paulo and Rio de Janeiro.