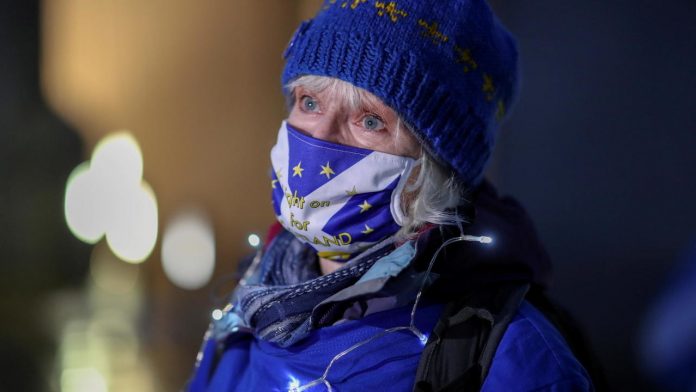 On Thursday, Britain finally broke off its turbulent half-life partnership with Europe and left the EU’s internal market and customs union to go its own way four and a half years after its shock vote to leave the bloc.

Brexit, which has dominated politics on both sides of the Channel since 2016, became a reality when Big Ben struck 23:00 (2300 GMT) in London, just as most of mainland Europe began in 2021.

Prime Minister Boris Johnson – the actor in the “Leave” campaign – described it as a “fantastic moment” for the country and played out his optimistic story of a “Global Britain” not imprisoned by the rules in Brussels.

He promised that Britain, after Brexit, despite being battered by a sharp rise in coronavirus cases, would be an “open, generous, outgoing, internationalist and free trade country”.

“We have our freedom in our hands and it is up to us to make the best of it.”

On the front page of its Friday edition, the strictly anti-EU Daily Express showed a picture of the Dover White Cliffs and the headline “Our future. Our Britain. Our destiny”.

The UK legally left the European Union on 31 January but has been in a stagnant transition period during brutal talks to secure a free trade agreement with Brussels, which was finally concluded on Christmas Eve.

Now the transition is over, EU rules no longer apply. The immediate consequence is an end to the free movement of more than 500 million people between the United Kingdom and the 27 EU Member States.

Customs border controls are returning for the first time in decades, and despite the FTA, which allows the UK to continue to have access to Europe’s nearly 450 million consumers, queues and disruptions are expected from further paperwork.

At the Eurotunnel terminal in Calais, French officials began carrying out the new formalities at midnight on the spot, starting with a truck coming from Romania with mail and parcels.

Matt Smith, CEO of HSF Logistics, which mainly delivers fresh meat and chilled goods between the UK and Europe, said he sent about 15 trucks to the EU on New Year’s Eve before the changes.

The government’s new customs system after Brexit is largely untested and Smith was hesitant about how his business would cope with the new paperwork.

“We are not so sure to be honest, it seems to be a bit of a headache,” he told AFP. “There will be delays along the line at some point.”

But for all new obstacles to come, the British government boasted of an immediate Brexit dividend when it announced an end to VAT on tampons, making sanitary products cheaper for millions of women after the withdrawal of EU tax rules.

Britain is the first member state to leave the EU, set up to create unity after the horrors of World War II.

The 2016 referendum opened lasting wounds between the left and the left and ushered in years of political paralysis before Johnson took power last year, promising to chart a future for Britain based on scientific innovation and new partnerships across the seas.

A parliamentary debate on Wednesday to ratify the trade agreement was marked by elegant dismissals by EU lawmakers and warnings of disruption as Britain dismantled the intricate network of ties built since joining the EU’s predecessor in 1973.

Worried about waiting for financial services

While EU duty-free and quota-free trade agreements averted potential business chaos in the immediate future, divorce will play out in many practical ways.

Changes apply to everything from pet passes, how long Britons can visit their holiday homes on the continent and an end to British involvement in a student exchange program.

Potential disruption in ports causes fears of food and medicine shortages, as well as delays for holidaymakers and business travelers who used to make seamless journeys in the EU.

British fishermen are unhappy with a compromise to allow continued access for EU boats in British waters.

The main financial services sector is also facing an urgent wait to learn on what grounds it can continue to deal with Europe, after being largely excluded from the trade agreement.

“Keep the light on”

Northern Ireland’s border with EU member states Ireland will be closely monitored to ensure that the movement is unlimited – a key plan in a 1998 peace agreement that ended 30 years of violence over British rule.

And in pro-EU Scotland, where Brexit has given a boost to demanding a new vote on independence, Johnson is facing a potential constitutional headache when 2021 dawns.

Scotland’s pro-EU prime minister Nicola Sturgeon promised in a tweet: “Scotland will be back soon, Europe. Keep the light on.”

Opinion polls suggest that most Britons, on both sides of the referendum division, want to move on and are much more concerned about the worsening coronavirus pandemic, which has claimed 73,500 lives.

Johnson, who himself is among nearly 2.5 million affected by the virus, warned of tough times ahead due to a recurrence of Covid-19 infections but said a UK-developed vaccine gave cause for hope.

“It’s going to get better,” said Maureen Martin, from the port of Dover across the Channel from France. “We have to control ourselves and be our own bosses.”

Britain is a financial and diplomatic big-hitter and a major NATO power with a permanent place in the UN Security Council and in the G7 grouping of the world’s richest economies.

The EU has now lost 66 million people and a $ 2.85 billion economy, and it is regrettable that Britain wanted out.

French President Emmanuel Macron said Britain would remain “our friend and ally” but lamented that Brexit was the fruit of “many lies and false promises”.

But his opposite EU speech, Michel Barnier, was more discouraging. “No one has been able to show me the added value of Brexit,” he told RTL radio.

“It’s a divorce … you can not celebrate a divorce.”

On board a Eurostar train in Paris as Brexit hour approached, Francois Graffin, 59, said he would pack up his life in London and return to live in France.

“It breaks my heart,” he said.

Can not blame the EU

In Britain, Brexit has been the culmination of years of anti-Brussels agitation as the Union transformed from a trading society into a more ambitious political project.

But the 2016 referendum never set out what form Brexit should take.

Johnson’s predecessor Theresa May repeatedly failed to push through a “soft” separation that would have kept Britain largely tied to the EU.

But he drove a much harder find, to the deep concern of British companies and opposition parties.

Now, after months of stormy negotiations that repeatedly arose from the pandemic, Brussels is also keen to move on.

But British lawmaker Chris Hazzard, of the Irish Republican Party Sinn Fein, said Brexit was far from over.

“When all the stench subsides … it will become depressingly clear that this trade agreement is … the beginning of a new trade relationship based on permanent negotiations, disputes and prosecutions,” he warned.

The Daily Telegraph, in which Johnson made his name as a Brussels-bashing European correspondent, said the government was facing a new reality cut by the EU bogeyman.

“Politicians need to get used to bearing much greater responsibility than they have been accustomed to while Britain has been in the EU,” it said.