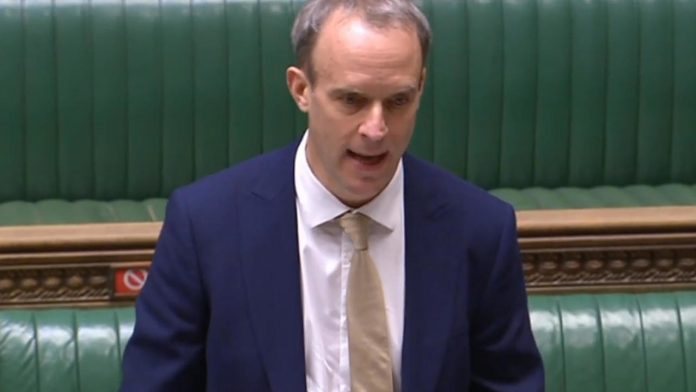 British companies will be fined if they do not meet new government requirements showing that their supply chains are free from forced labor, the British Foreign Secretary said on Tuesday when he announced measures aimed at tackling human rights violations against the Uighur minority in China’s Xinjiang region.

British Foreign Secretary Dominic Raab said officials had issued instructions to British companies with links to Xinjiang on how to perform due diligence checks. The government intends to exclude suppliers when there is evidence of rights violations in their supply chains and also to review export controls to prevent the shipment of goods that could contribute to such violations in Xinjiang.

“Our goal is simply that no company that benefits from forced labor in Xinjiang can do business in the UK and that no British business is involved in their supply chains,” Raab told lawmakers.

However, Raab did not provide details, and he ended up issuing specific sanctions against Chinese officials.

The evidence “paints a frightening picture” and showed how “barbarism we had hoped to lose at another time”, Raab said.

In response to Britain’s criticism of its human rights, China’s ambassador to the UN on Tuesday urged Britain not to interfere in its internal affairs.

Beijing says measures were needed to eliminate the population following a series of attacks in the Xinjiang region several years ago.

Among the measures announced on Tuesday, the UK will fine companies with a turnover of at least 36 million pounds (49 million dollars) that do not publish an annual declaration of transparency required by the Modern Slavery Act.

Details of the fine have not yet been specified.

One-fifth of the 18,625 companies required to comply with UK anti-slavery law have not issued statements, according to the Transparency in the Supply Chain (TISC) – a public database.

Britain’s anti-slavery tsar Sara Thornton welcomed the new measures but said the threat of fines was not enough and called on the government to force companies that do not meet the requirements to submit a statement.

The US Customs Service blocked the import of clothing and other goods from Xinjiang last year due to forced labor.

The British opposition Labor Party also called for more concrete action, with Lisa Nandy, the party’s spokeswoman for foreign affairs, noting that Raab’s words did not match his actions.

“I’m sorry to say that it will be felt loud and clear in Beijing,” she said.

Last week, the British retailer Marks & Spencer became one of the first major brands to support a civil society initiative to stop forced labor in cotton and clothing from Xinjiang.