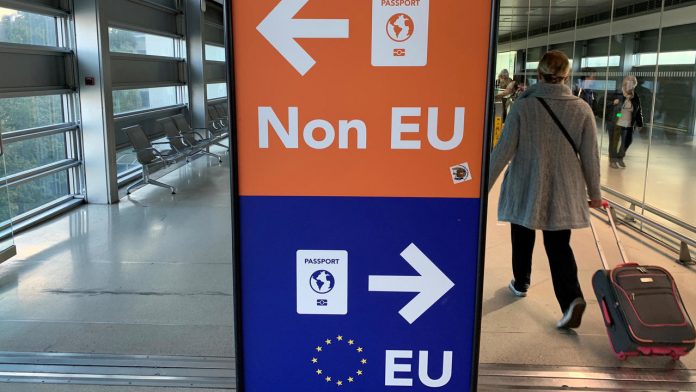 A few days after a “mutant” coronavirus strain destroyed the Christmas plans for holidaymakers on both sides of the English Channel, Brexit bureaucracy and confusion have raised barriers for Britons trying to return to their homes in several European countries.

After a holiday season already dampened by the Covid-19 pandemic, Brexit blues has started early for Britons living in EU states that now regard them as “third-country nationals”.

Over the weekend, several Britons expressed their dismay on social media after being banned from boarding flights to EU countries in which they live. Others have complained about difficulties in receiving the social benefits to which they are entitled.

Most of the complaints concerned flights to Spain, home to the largest number of registered Britons in Europe, although Spanish authorities claimed that the problem had been resolved by mid-Sunday.

We have shared a statement on travel chaos this weekend and will follow up with the FCDO, Member States and the Commission: https: //t.co/ko3tHjvm5h

“Britons around the EU have encountered difficulties, with people banned from flying or stamping their passports, even though they have valid UK passports, EU residence documents and PCR tests,” the group said in a statement on Sunday.

The chaos comes under strict restrictions due to a coronavirus variant that has been blamed for faster infection in the UK. It has also highlighted the bureaucratic complexities caused by Britain’s exit from the EU, exacerbating the frustrations of foreigners directly affected by the result of a referendum in which many could not take part.

“The combination of the post-Brexit transition, the new coronavirus strain and the end of public holidays has created a perfect storm,” said Matt Bristow, spokesman for Britain in Germany, Britain in Europe’s German branch, in an interview with FRANCE 24.

Following the discovery of the coronavirus variant in the UK, many European countries have banned travel from the British Isles in addition to their own citizens and British citizens with a right of residence.

On Sunday, the Dutch border police reported that several British travelers had been refused entry after failing to state an “urgent reason” to travel to the Netherlands. “They all had a negative PCR test, but had forgotten the basic rule, that they must have an urgent reason to come, such as work or serious family problems,” a police spokesman told local broadcaster NOS.

But Britons living in EU countries have faced similar obstacles amid confusion over the paperwork required to prove their stay.

In such a case, Britons trying to board Lufthansa flights en route to Germany were wrongly told that they must have a permanent residence permit to travel, according to the German branch of British in Europe.

Why does @Lufthansa_DE still tell passengers that #Bundespolizei has said that they can only let those with a permanent residence permit in [Germany] onboard flights? British citizens covered by the exit agreement can enter even without a 5-year stay, “the group wrote in a Twitter post on Monday.

Why does @Lufthansa_DE still tell passengers that #Bundespolizei has said that they can only let those with a permanent residence permit in 🇩🇪 board flights?

British citizens covered by the exit agreement may enter even without a 5-year stay. Https://t.co/mW2bZVjanM

According to Bristow, the erroneous conversations stemmed from confusion among German officials and flight crews regarding the rules that apply to British citizens after Brexit, combined with the fact that some German nuances are lost in translation.

He pointed to other difficulties that some Britons in Germany have been experiencing since early January, including bureaucratic obstacles to gaining unemployment or childcare benefits.

Mr Bristow also noted discrepancies between the European Council’s guidelines and certain national provisions, referring to the case of a British citizen who was prohibited from making a stopover at Munich Airport on his way home to Austria. He added: “Borders that have long been invisible to Europeans still remain for some, as the British are now discovering.”

Confusion over paperwork and terminology also caused disruption to travel to Spain, where a new system for registering foreign residents is lagging behind due to the large number of inquiries.

Madrid announced last year that British citizens residing in Spain would receive a photo ID to replace the current residence permits held by EU citizens. Tens of thousands have applied for the card, but many are waiting to get it due to the demand for the system.

Meanwhile, the British and Spanish governments have said that both the old Foreign National Identification (NIE) document and the new Foreign ID card (TIE) are valid for travel.

Despite this, several Britons living in Spain were prevented from boarding Iberia and British Airways flights to Barcelona and Madrid after the airlines claimed that their papers were no longer valid.

Photographer Max Duncan, one of several travelers rejected at Heathrow Airport on Saturday, tweeted that British expats were “distressed because (they) can not fly home”, after being told that their residence permit was no longer sufficient.

Iberia admitted late on Sunday that a message from Spain’s border police on January 1 had created “some confusion” and that it was later clarified.

The Spanish Foreign Ministry spoke of “an isolated communication problem with some airlines affecting a very small number of passengers” and assured that air traffic between the UK and Spain continued “with normality”.

Some travelers who did so at check-in were quick to flag another issue and noted that their passports were stamped when they entered the EU – in violation of the provisions on exit agreements.

In a written exchange with FRANCE 24, Kalba Meadows, one of the founders of France Rights, the French British Army in Europe, said, “It seems that passports for British citizens returning to France are routinely stamped, for many [if not all] entry points. ”

She added: “This can lead to problems further down the line because entering France with a passport stamp can mean that a visitor has not been entered as a resident, which sets the clock for a maximum of 90 days out of 180 days that a third-country national can stay in the Schengen area. ”

Meadows said her association had raised the issue with the British Embassy in Paris and noted that the difficulties experienced by many travelers had been exacerbated by skeletal staffing at British embassies during the holidays. France Rights has also issued detailed instructions to Britons in France, emphasizing that their passports should not be stamped if they reside in France, have applied for a residence permit or can prove that they lived in France before the Brexit transition ended on 31 December.

Passport stamps have also been reported at Germany’s largest airports, increasing the anxiety that British residents feel about already fearing the consequences of Brexit, Bristow said.

“People are worried about encountering problems later, in order to lose certain benefits and rights,” he said. “They all have the right documents, but there is a fear that the message will not be passed on to officials at all levels of government.”

Clarissa Killwick, who together runs the Facebook page “Beyond Brexit – UK Citizens in Italy”, reported similar concerns among Britons in Italy. She quoted media reports about at least one British citizen, a professor at the European University Institute in Florence, who was banned from a Ryanair flight to Pisa because she could only produce a paper residence document instead of a photo card.

“The thing is, we’re in a whole new territory as four-day-old third-country nationals, which makes everyone feel very nervous,” Killwick told FRANCE 24. “This, combined with pandemic twists, is sending people’s stress levels through the roof. ”