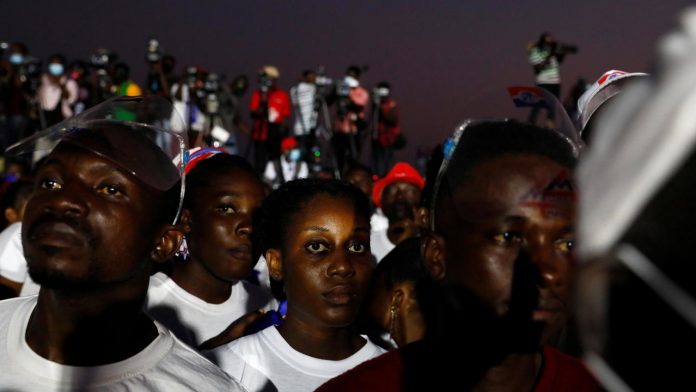 Definition of vuvuzela and party songs took over Ghana’s capital Accra on Saturday, the last day of the presidential and parliamentary election campaign.

Twelve candidates, including three women, are vying for the West African nation’s top job, but Monday’s vote is essentially a battle between President Nana Akufo-Addo, 76, and former head of state John Mahama.

The city center was plastered with signs and posters and flags in every corner.

Akufo-Addo, who was driving for a second term, drove through the cramped city of Nima and made a whistle to recognize mammoths dressed in T-shirts from the ruling New Patriotic Party (NPP).

“It’s a clear deal. It’s clear. The audience says it all. Another four (years) for Nana,” a party supporter, Dauda Faisal, told AFP.

Despite all the COVID-19 protocols – with only a handful of face masks – the ecstatic crowd waved miniature flags as the president walked toward the rally site where he was to speak to supporters.

Opposition leader John Mahama, meanwhile, began his last day of campaigning by meeting with local leaders and union leaders and assuring them of more jobs if he won the December 7 election.

Mahama, 62, who has been working hard for several months, was expected later in the evening at a meeting organized by his party, the National Democratic Congress (NDC).

More than 17 million people are registered to vote in the country’s eighth ballot since it returned to democracy almost 30 years ago.

This is the third time that Akufo-Addo and Mahama run against each other, and the race is expected to be very close.

The results can be announced within 24 hours after the voting has closed.