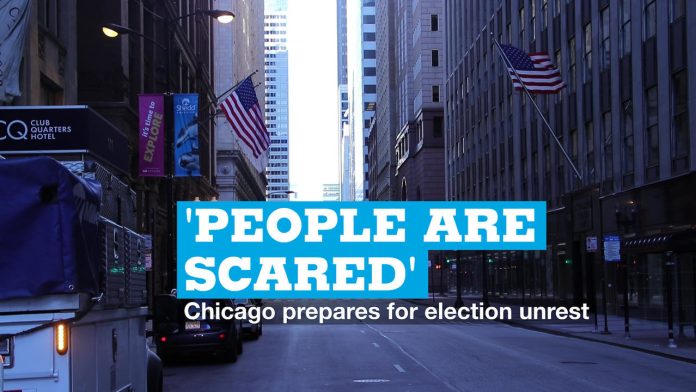 As the United States prepares to vote in one of the most divisive elections seen in decades, tensions are rising across the country. In Chicago, which was already hit by riots and looting earlier this year, stores have been aboard their windows, and security has been put on hold, fearing the result of the vote could trigger violence.

“We had two lootings, riots. And the first time we were hit, so we have to protect ourselves,” said nail salon manager Thao Ha, referring to unrest over the summer triggered by the murder of George Floyd. “It will probably happen again before the election.”

Her business is just one of dozens of boards covering windows and glass doors to prevent damage in the event of violence after Wednesday’s vote.

The mayor of Chicago has appealed for calm regardless of the outcome of the election.

But some Chicago residents fear the worst.

“I understand why shops and restaurants go on board,” said Caroline, a voter who cast her ballot early this year.

“I hope it does not come to that, but also given all the increased emotions and violence we have seen this summer, I think it makes sense that people are scared.”