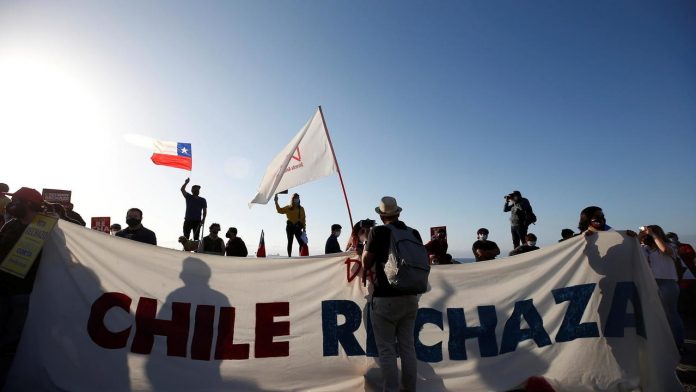 One year to the day after more than a million people invaded downtown Santiago in the biggest march in Chile’s social uprising, Chileans are voting on Sunday on whether to change the country’s constitution for the dictatorship.

Voters are expected to turn up in numbers, spurred on by slogans screaming from the graffiti-scratched walls of central Santiago, raking back to the violent protests that left 30 people dead and thousands injured.

“Chile decides,” and “I want peace, so I vote Reject!” shouting inscriptions in the city center, where copies of the constitution with blue jacket – which critics say favored the wealthy – sell as souvenirs.

“Learn how they privatized our water,” scared a salesman from a kiosk on central Paseo Huerfanos Street.

A protest movement that had drawn thousands to the streets daily reached critical mass on October 25, 2019, and within a few weeks, President Sebastian Pinera had agreed to initiate a process to draft a new constitution.

The demand for a new constitution had been a recurring theme of the protests, set off against an increase in fares for public transport. They quickly became widespread demonstrations against social and economic inequalities – including health, education and pensions – inherited from the government of Augusto Pinochet from 1973-1990.

Chileans will be asked two questions about the ballot papers: to approve or reject a new constitution, and if necessary, what kind of body will draft it – a mixed assembly of legislators and citizens or a 155-member convention consisting exclusively of citizens.

Support for a new constitution

Opinion polls show that more than 70 percent support a new constitution, with only 17 percent voting in favor.

Polls also indicate similar support for a constituent all-citizen convention to be elected in April 2021.

Their draft would be put to another referendum in 2022.

“A first goal of this constitutional process is to leave the shadow of Pinochet’s dictatorship to draft a new constitution without the original sin having been created using force,” Marcelo Mella, a political scientist at the University of Santiago, told AFP .

The second goal, Mella added, “is to be able to solve the political and peaceful means of the problems that have become structural and that downplay the function of Chilean democracy,” such as inequality and social exclusion.

Rejectionists, including conservative legislators, warn that the constitutional process could undermine the decades of economic stability supported by the existing constitution and deter foreign investment.

Their fears are driven by the violence that accompanied the protests.

Covid-19 health measures are in place at polling stations

Polling stations open at 8 a.m. and close at 6 p.m. 20.00, two hours longer than usual to give voters enough time and avoid overcrowding due to the coronavirus pandemic that has hit Chile hard.

Chile surpassed 500,000 Covid-19 cases on Saturday with nearly 14,000 deaths, giving some uncertainty to the likely turnout in a country where voting is voluntary.

The referendum “takes place in the midst of a pandemic that requires overcoming fears of going to the polls,” Gloria de la Fuente, head of the Chile 21 Foundation’s political research group, said in a newspaper column.

Tables, chairs and other furniture are disinfected in all polling stations.

At the National Stadium in Santiago, which is expected to welcome around 300,000 voters, disinfection teams have sprayed the facilities with copper nanoparticles, which have been shown to be effective in destroying the virus.